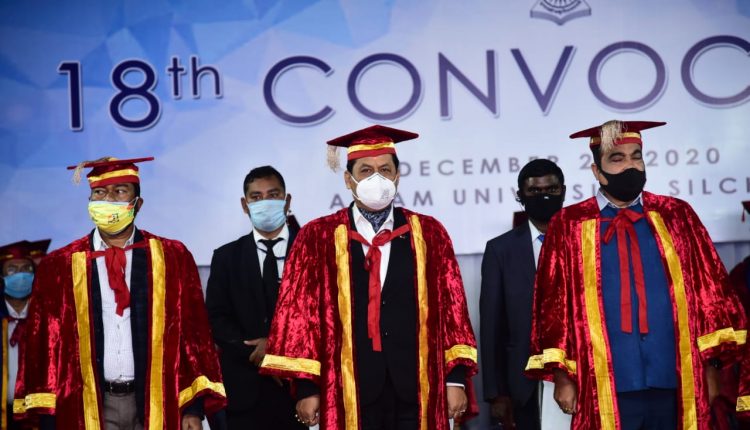 On December 25, Assam University conducted its 18th Convocation in the presence of Union Cabinet Minister for Road Transport & Highways and MSME Nitin Gadkari, Rameshwar Teli, Minister of State in the Ministry of Food Processing Industries, Chief Minister of Assam Sarbananda Sonowal, Minister for Forests, Fisheries and Excise in Government of Assam , Parimal Shuklabaidya and
Member Of Parliament Dr. Rajdeep Roy.

Since the announcement of the convocation, the occasion found itself shrouded in a number of controversial decisions. To begin with, the decision of conducting a convocation ceremony on Christmas raised a lot of eyebrows. The decision seemed all the more peculiar in the backdrop of the increasing aversion to Christmas in Barak Valley.

Thirdly, the decision of not inviting a single academician of national repute was very peculiar in its nature . All the universities across India have the tradition of inviting scholars, scientists and academicians to their convocation ceremonies. Assam University, until this year, invited Vice Chancellors of other reputed universities, Academicians of national repute and standing and eminent scientists in their precious 17 convocation ceremonies. This year, however, Assam University’s stage was divorced from any invited eminent personalities from the academic realm.

If the above grey areas demanded more light from the University administration, a shocking statement by the Chief Minister of Assam Sarbananda Sonowal, while addressing the occasion, has drawn much greater flak from many eminent personalities of Barak Valley. In his address the Chief Minister said,
“Assam University is a fruit of Assam Accord” . He went on to shower his praise for the martyrs of Assam Movement and how their sacrifices culminated into the creation of Assam University.

To the many reporters, students and teachers present there, Chief Minister’s knowledge about the history of the institution, in which he was speaking as the Guest Of Honour came across as an absolute shocker. The incredibility of the claim was further worsened by the press release published by the Chief Minister’s Public Relations Cell. The press release read-
“Terming Assam University as the result of the Assam Accord , he paid rich tributes to the martyrs of Assam Movement ”

One could have overlooked a possible gaffe from the Chief Minister but the CMO’s press release has indubitably established that the Chief Minister firmly believes in what he said. To get reactions to the Chief Minister’s claim – Assam University is a fruit of Assam Accord and Assam Movement – Barak Bulletin got in touch with some of the eminent voices of our valley.

“Chief Minister’s statement is an example of a blatant and purposeful attempt to distort the history of our region . The long and arduous struggle that lead to the formation of Assam University has no remote connection with Assam Accord. Assam University is a culmination of our rich intellectual and cultural heritage – a people’s struggle for an higher educational Institute in a systematically deprived region of Assam. Chief Minister’s claims are as much adrift from facts as one can possibly imagine. Assam Accord is a testament of destruction of our cultural, intellectual and linguistic identity. The chauvinistic fringe who fought against the conception of an university in Barak Valley cannot claim that they fought for it’s creation. Such statements are founded in misinformation, or worse, a design to divest the people of this valley of its sense of prestige in it’s capacity to strive for one’s dreams and aspirations ”

“As a daughter, I will not reiterate what my father Late Santosh Mohan Dev, did for the creation of a central university in our valley. However, I must say that such statements flies in the face of our understanding that the Chief Minister of Assam actually knows about our region. The struggle for the creation of Assam University had the contribution of people of this valley from all walks of life. More so importantly, the citizens of Barak Valley should know how BJP leaders like Bijoya Chakraborty fought tooth and nail against the idea of an university in Barak Valley. Irony cannot die any more painful deaths- the people of the same ilk are trying to appropriate the struggle for Assam University as an extension of Assam Movement. I wish I could dub the statement as hilarious if only it weren’t a blatant disrespect for the long struggle of the people of our valley ”

“Assam Movement was an well orchestrated onslaught against the Bengali speaking population of Assam. Have we forgotten how our children were beaten and harassed during the Assam Movement? Mark sheets torn up, students forced to return home, humiliated for their mother tongue-such were the features of the much ‘celebrated’ Assam Movement. To give voice to the sufferings of the students of our valley, ACKSHA was conceptualized. For long 10 years, we struggled for a central university in our region. Lest we forget how we were hounded and harassed for our demands for a platform of higher learning for the people of our valley. When the idea of Assam Central University in Silchar got the parliamentary assent, the State Government, headed by AGP, created all kinds of problems so that our dream never comes to fruition. We had to struggle for a piece of land in our own Barak Valley for our own university against the Government of our state – Such was the contribution of Assam Movement to Assam University. We haven’t forgotten how Bijoya Chakroborty ripped apart the Assam Central University Act in public as her mark of protest against a university in Silchar. Chief Minister Sonowal’s statement has deeply hurt our sentiments. Let us also not forget that Late Bimalamgshu Roy was one of the prime soldiers of our struggle for Assam University. It is so ironical that Dr Rajdeep Roy, son of Late of Bimalangshu Roy, didn’t protest when the Chief Minister said that Assam University is a fruit of Assam Movement. ”