Assam University Silchar announced that it will conduct the final semester examinations of the three-year degree courses (CBCS) from September 24 onwards. In a notice issued today, the University has released the programme for the upcoming final semester examinations. With a notice of only 17 days, the students are expected to be prepared to take the test in offline mode.

It is worth mentioning here that the offline classes only began on September 6. Earlier this year, the students and the University authority were at loggerheads as the students demanded the option to opt for an online examination. The district administration intervened but the University continued with the Offline examinations as per the schedule.  The authority maintained that when the malls and wedding halls are open, the University does not have the right to keep its affairs shut. They said that they will only postpone the examinations if the Department of Health issues a letter asking to do the same. Only when the Government of Assam ordered the institutions to remain shut as the second wave of coronavirus infections had hit the state like a Tsunami, the University suspended the remaining examinations.

However, this time the situation is different. The students who want to pursue higher studies are in a dilemma as they are yet to complete their degree courses. The sixth-semester examination, therefore, stands as an obstacle between them and their future course of studies. As per the programme, the examination is set to conclude on October 10, 2021. This is for courses under Arts, Science, Commerce, Computer Application, Business Administration and BVoc streams.

Speaking with Barak Bulletin, Controller of Examinations, Assam University Silchar – Dr. Suprabir Dutta Roy said that the University has taken the decision following the Standard Operating Procedures issued by the Government of Assam. “The examination will be conducted in offline mode where the students will sit at the examination centre and take the test. We will follow the protocols issued by the Government of Assam in its latest standard operating procedure,” stated the controller of examinations.

Also, the University is yet to declare the results of the odd semester examinations it conducted earlier this year. So, the students, in all likelihood, will take the sixth-semester tests without knowing if they have cleared their fifth semester.

Here is the programme announced by the Assam University: 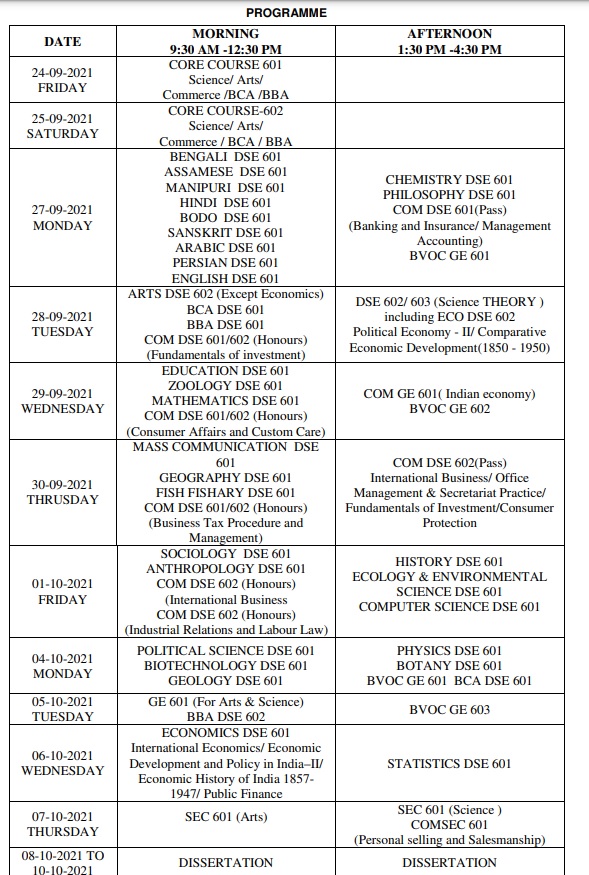