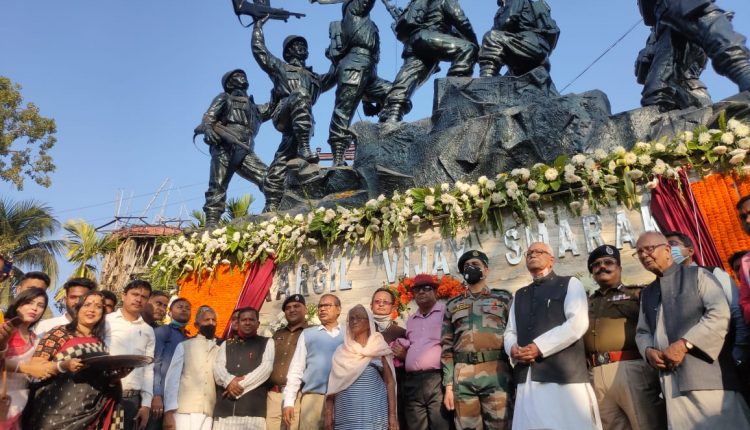 At Tarapur END Colony point right before entering the overbridge, a scene has been recreated from the Kargil war. Named ‘Kargil Vijay Smarak’, the war memorial statue has been erected at the initiative of Silchar MLA Dilip Kumar Paul. A first of its kind in North-east India, the Kargil Vijay Smarak was officially inaugurated on Sunday evening by Indian Army’s Masimpur Station Commandant Colonel Pankaj Yadav, Kargil martyr Jawan Nandchand Singh’s mother I Brinda Devi and retired Captain Ram Bhagat. It was attended by MP Rajdeep Roy, SP B. L. Meena and other guests as well.

A small inauguration event was held in the area adjacent to Tarapur END Colony. MLA Dilip Kumar Paul said that a total of Rs 17 lakh has been spent to build the Kargil Vijay Smarak. Out of that, Rs. 10 lakh was collected from the Chief Minister’s fund, and the rest of Rs. 7 lakh from the MLA’s own development fund. It took about seven months to build the memorial. Everyone has worked hard to build such a historic memorial in Silchar in such a short period. during the Kargil War in 1999, Atal Bihari Vajpayee was the then Prime Minister of India. A 10-foot-tall bronze statue of him has already been erected at Zero Point at the Rongpur Highway, which also happens to be the only one in the North-east.

Nayan Chand Singh of Cachar district was martyred in the Kargil war. Speaking on the occasion, his mother I. Brinda Devi said she was still proud of her son’s martyrdom. Everyone present bowed their heads and applauded. All the guests repeatedly paid homage to the mother of the martyrs in their speeches. DC Kirti Jalli said, “Standing at this event even after nearly two decades of that fateful battle, she says that she is proud of her son’s sacrifice. We are proud of a mother like her.”

Kabindra Purkayastha was the Union Minister as well as MP from the Cachar district during the Kargil war. At that time, he had the opportunity to see the activities of Atal Bihari Vajpayee very closely. Speaking on the occasion, he said, “The way India is respected now around the whole world, it was not the case always before. The late Prime Minister Atal Bihari Vajpayee dreamed of taking India to a much better place on the world map. Incumbent Prime Minister Narendra Modi is taking his legacy forward. Today, the country’s youth are proud of themselves as Indians. This monument is one such example. ”

MP Rajdeep Roy said, “I have visited various cities and am proud to see various memorials there. But today, the Kargil Memorial has been built in my city, a statue of the late Atal Bihari Vajpayee has been erected a few days ago. There is no such instance in any other city in North-East India. I congratulate MLA Dilip Kumar Paul and his colleagues on such an achievement.

DIG Dilip Kumar Dey said, “We see many people constructing other pillars including flower gardens. But the Barak Valley has never seen such a large memorial of the Kargil war. As a government employee, I salute MLA Dilip Kumar Paul for this commendable work. This memorial will remind the youth how much the soldiers are sacrificing and protecting us from external enemies. Our responsibility is to save the country from internal enemies. I believe that the youth will be much more aware of the security of the country by seeing this memorial. ”

Superintendent of Police B.L. Meena said, “Usually when it gets a little cold, we want to put on a lot of clothes, and we tend not to leave the house. But to save the country, they fought day after day in minus 50-degree temperature and won. This memorial will remind us of that again and again. ”

The statue was built by sculptor Swapan Paul. He said that the statue was made of fibre, which took seven months to build. “It is a historic moment because the Kargil victory is a matter of pride for each of us,” he said. “I am forever grateful to the MLA for giving me this opportunity to build. Also grateful to the mother who is still proud of her son’s sacrifice. ”