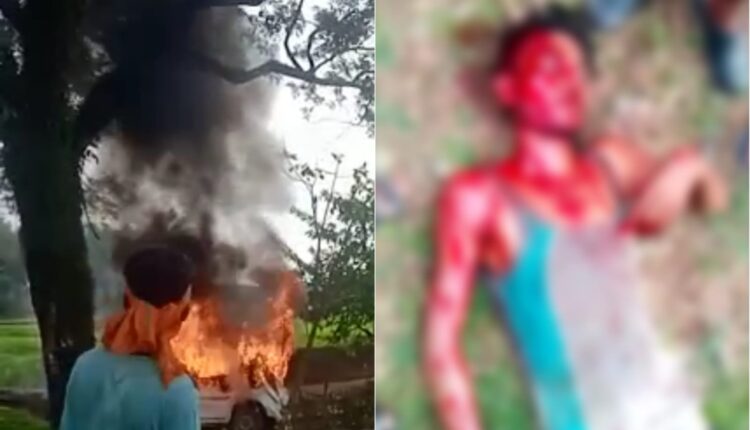 Yesterday afternoon, in a dreadful incident, a Cachar local was mercilessly beaten by a violent mob in the Dewan Tea Gardens of Jaipur, after they suspected him to be a child lifter, known as Khuchidora to the local tongue.

Sahin Ahmad Laskar had gone to the tea garden area to drop off passengers from his car after completing a trip. His car was first broken and damaged and later burnt down, while he lay there helplessly in a pool of blood. The locals of the tea garden thought this 26-year-old to be a child lifter and did not pay heeds to his pleas.

The victim Sahin Ahmad Laskar’s cries for mercy were unheard, even when no children or any suspicious items were found in his possession. Right now, Sahin is fighting for his life at the Silchar Medical College and Hospital. A similar heart-wrenching incident four years back had shaken the entire nation when Abhijeet Nath and Nilotpal Das were lynched in Panjuri village of Karbi Anglong district on June 8, 2018.

Sahin was mercilessly beaten by the violent mobs with steel rods, bamboo sticks and wooden logs. Dissatisfied by this vendetta, the public went ahead to destroy his four-wheeler and burnt it down.

The physical attack on him has caused, what is suspected to be a “craniocerebral injury”, a critical injury to the brain. Such traumatic brain injury usually results from a violent blow or jolt to the head or body. This can mostly happen if any object goes through the brain tissue, such as a bullet or shattered piece of the skull which might affect your brain cells temporarily.

After the entire fiasco, the Cachar Police has “requested people to not pay heed to the rumours and take law in their hands”. Speaking about the new case of rumoured Khuchidora, the Cachar SP Numal Mahatta last night said, “We have filed a case in this incident in Jaipur and we are trying to identify the miscreants. The investigation is still on and we will take stringent actions against them”.

Speaking about the false information and rumours spread on social media and messaging platforms, the senior APS officer said, “Our social media monitoring cell is active and we are collecting information on all such cases. We will take strict actions against those rumour mongers who are circulating misinformation on social media”. Last night, five miscreants who were involved in this were identified and arrested from Jaipur. The arrested include, Nishit Barman, Pranab Barman, Kamala Kanta Barman, Satyabrata Barman and Rohit Barman. Among them, Rohit Barman is just 18 years old.

Early this morning, another 5 individuals were also arrested, who were allegedly involved in the incident. They have been identified from the video analysis and were apprehended by the police. The SDPO of Lakhipur, IPS Dinesh Kumar speaking with Barak Bulletin said, “Among the five individuals arrested in this connection today, some of them are minors and have not yet appeared for their 10th board examination even. That is why we can’t reveal their details but we are trying to investigate the matter and find out their role in the whole matter. So far we have made 10 arrests in total and the search is still on to find the others involved in the incident”.

Speaking about the chain of events, the SDPO said, “Since the last three-four days, the rumour has spread in the tea garden areas of not just Jaipur and Cachar, but also in the tea-garden areas of Karimganj and some places in upper Assam about the alleged child lifters. It is the time of bonus for the tea garden labourers and some of them get intoxicated with illicit liquor after earning the bonus. They are the ones who have a big hand in spreading the rumours. A few days back, we somehow freed four such innocent individuals from Jaipur, who were also doubted to be child lifters by them”.

Speaking about yesterday’s case the IPS Officer said, “The victim is a 22-year-old, four-wheeler driver who works on a contractual basis with a hospital in the Jaipur area itself. His name is Sahin Ahmad Laskar and while he was returning from Dewan tea gardens, some of the labourers there spread a rumour that a child lifter has entered the area in a car. This message spread far and wide and the entire Jaipur got to know about this in no time. First, the tea garden labourers started to chase him while he was driving and he speeded with his car when he saw them, chasing him. But he was stopped in a place called Shivasthan, where the people apprehended him and started to beat him. Later his car was also burnt down. Right now he is hospitalised and his condition is stable”.