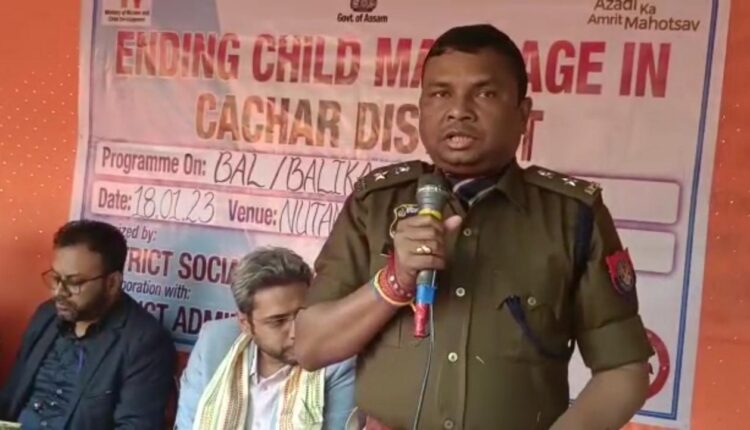 Awareness meeting against Child marriage in Silchar; "A home where a girl is educated, the family becomes educated"

An awareness meeting regarding child marriage was held at New Ramnagar in East Sonai. On Wednesday afternoon, a meeting on Beti Bachao Beti Padhao was organised at Nalgram LP School No. 884 arranged by District Social Welfare Department with the support of Cachar District Administration. Deputy Commissioner of Cachar Rohan Kumar Jha was present as the chief guest on the occassion. Cachar Superintendent of Police Numal Mahatta was present as guest of honour. DC and SP urged parents to become aware for preventing child marriage.

Speaking on the occasion Cachar SP Numal Mahatta said, “Child marriage is a crime as per law. Quarrels and fights alongwith family trouble take place frequently in the homes of couples who do child marriage. At a home where a girl is educated, the family becomes educated and when a family is educated the society becomes educated and the nation progresses forward. I would request the women present here to become more aware of their rights.”

Addressing the gathering, Cachar DC Rohan Kumar Jha said, “Our aim is to stop child marriage. Not a single child below 18 years of age should be married. We should become aware of the harmful effects of child marriage. A child requires time to develop and mature. Marrying before the right age is harmful as disputes and divorce take place after marriage. The law prohibits marriage before 18 years so that a person becomes matured mentally as well as physically and only after that chooses his or her life partner. If a child marriage happens then their parents will also be penalised as per the law. Our police station is open 24 hours to report incidents of child marriage. We will keep the name of the person anonymous who reports to us about child marriage.”