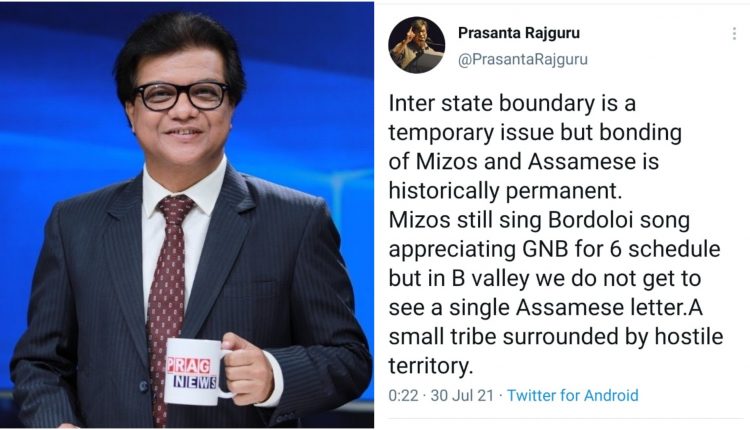 "B. Valley a hostile territory!" Why Prasanta Rajguru owes an apology for his distasteful comments!

“Inter-state boundary is a temporary issue but bonding of Mizos and Assamese is historically permanent.
Mizos still sing Bordoloi song appreciating GNB for 6th schedule but in B valley we do not get to see a single Assamese letter.A small tribe surrounded by hostile territory”- tweeted Prasanta Rajguru, the Editor In Chief of Prag News, Former Editor of Amar Asom, a Rotary International Peace Fellow, recipient of the MAJA KOENE Social Journalist Award, and a preeminent intellectual voice of our state of Assam. Prasanta Rajguru’s opinion matters, his influence is far-reaching, his stature is towering and his voice reverberates in the hearts of our Assamese brethren.

Had Prasanta Rajguru been a random Twitter troll, a compulsive xenophobe, a juvenile jester, it wouldn’t have merited a rejoinder. But Prasanta Rajguru’s stature and his outrageous tweet have become so acutely irreconcilable that it deserves to be critically analysed in the public domain. The residents of B. Valley (in Mr. Rajguru’s sloppy nomenclature) is deeply anguished and hurt by his comments. Thus, in the light of facts, evidence, and data, let’s substantiate the reasons why Prasanta Rajguru has done a colossal disservice to his intellectual stature by his bizarre comments.

” ..Bonding of Mizos and Assamese is historically permanent .”

While the attempt to douse the anger simmering across both the states is appreciable, but it must not be at the cost of demonising the Bengalis of Barak Valley. The obvious insinuation of the statement is – Assamese and Mizos have been historically bound to each other, it’s the Bengalis who play the spoilsport. Prasanta Rajguru is of the opinion that the ‘temporary inter-state boundary dispute ‘ is entirely because of the people of Barak Valley who have smeared the platonic bond between the Assamese and the Mizos. A hostile territory inhabited by hostile people, so Rajguru clearly infers. Well, Rajguru couldn’t have been more wrong.

Let’s analyse his ‘historical bond’ bogey first. One has to take Mr. Prasanta Rajguru into the annals of history to show how the Bengalis had nothing to do with one of the worst episodes of animosity and bloodshed between the Mizos and the Assamese since the independence of our country. Here are some historical insights for Prasanta Rajguru. In every 50 years, there came a season of flowering of the vast bamboo forests of Mizoram. The flowering season, however, brought havoc, starvation and death to the rugged beauty of the state. “Mautam”, as the Mizos called it, attracted scores of rats that ravaged the rice and vegetable fields of Mizoram. It was mayhem all around with people dying out of sheer starvation. In 1959, all efforts by the Mizo people to get meagre help from the Assam Government for subsistence and survival went in vain. Sanjay Hazarika, a prolific writer and a thinker wrote in his book ” Strangers of the Mist ” – “Exasperated by the Assam’ s government’ s failure to rush assistance in time, the Mizo formed a few famine fighting squads. The most prominent of these groups was the Mizo Famine Front (MFF), launched by a young bank clerk named Laldenga.”

It marked the beginning of one of the worst armed insurgencies in the history of our country. Laldenga would go on to form the Mizo National Front (MNF) with the demand for independence for the nation of Mizoram. Sanjay Hazarika writes, “The message was simple: the state and the Central Government did not care for the Mizos and this was shown by the shoddy response to the famine.”

Assam’s the then Chief Minister, Bimala Prasad Chaliya made the incorrigible mistake of dubbing Laldenga as a ‘mere bank clerk with a few mercenaries.’ People continued to die like wanton flies under the debilitating impact of the famine as Laldenga conjured up a full-fledged armed insurgency against the Union of India. The crescendo of the anger reached on February 28, 1966. Laldenga launched ‘Operation Jericho’ – a full-blown armed insurgency at the heart of Mizoram. Mizo guerrillas overran Aizawl, captured the radio station, police stations, The Treasury and all other important Government establishments. The other major town of Lungleh also fell prey to the might of the armed men of Laldenga. A nation woke up to the shocking news of Mizoram declaring its independence from the Union of India.

After one complete week of a fierce battle between the Indian Army and the Mizo guerrillas, Aizawl was reclaimed. It was also the first time in the history of our republic that air raids had to be ordered within our own country. It is worthy to point out that Laldenga ended up becoming Mizoram’s first Chief Minister and his party rules the State Government even today.

You see, Mr. Rajguru, your story doesn’t have holes, holes have your story. Let’s debunk his tweet further.

The statement has the following couched assertions –

a) Mizos adulate Gopinath Bordoloi for bringing them under the ambit of the 6th Schedule of the Indian Constitution while the people of Barak Valley don’t have similar regards for ‘GNB’.

b) The people of Barak Valley have an innate repulsion towards the Assamese.

c) Assamese isn’t allowed to be taught in Barak Valley.

To begin with, it is historically wrong to credit Gopinath Bordoloi for the inclusion of the 6th schedule in the Indian Constitution.

In the Constituent Assembly of India, J.J.M. Nichols Roy spearheaded the demand for autonomous governance in the tribal regions. Roy, a tribal from the Khasi hills in present-day Meghalaya, informed the Assembly about the apprehensions of hill tribes about living under the newly-formed Indian State. He proposed to address their concerns by creating the Sixth Schedule, which would give them the right to self-governance in accordance with their traditions.

Roy’s proposal was opposed by his fellow member from Assam, Rohini Kumar Chaudhari, who wanted to assimilate tribals into the non-tribal population. Chaudhari argued that the Sixth Schedule continued the British policy of preventing the tribal population from mingling with other Indians.

Both Kulahad Chaliha and B. Das supported Chaudhari and also argued that the Sixth Schedule had the potential to instigate communism. Das fervently contended that Roy’s proposal was “in continuation of the ‘two-nation’ theory”. He stated: “Sir, I hate the provision of Sixth Schedule whereby you are perpetuating primitive conditions of life…The British spies through help of British and American missions and Communists are coming through these tribal areas and for that Reverend Nichols-Roy will be held responsible.”

However, Gopinath Bordoloi did extend his support to the inclusion of the 6th schedule in the following words –
“There are certain institutions among these hill tribals which, in my opinion, are so good that, if we wanted to destroy them, I considered it to be very wrong… [such as ] the manner in which they settle their disputes…[and] their village administration. In other words, they are exercising a certain amount of autonomy which, I thought, and the members of the Tribal Sub-Committee thought, should be preserved rather than destroyed. What is necessary for good government is already there.” Ultimately, Roy’s proposal, which was backed by the Chairman of the Drafting Committee B.R. Ambedkar, was accepted. The Sixth Schedule was added to the Indian Constitution on 7th September 1949.

So, you see, Mr. Rajguru, Mizos singing songs for Gopinath Bordoloi alone for the inclusion of the 6th schedule doesn’t have any factual backing whatsoever.

Secondly, your insinuation that the people of Barak Valley have a sense of repulsion towards Assamese reflects your prejudiced perspective. You are not privy to the extraordinary sense of cultural assimilation that has happened over the years. It would take an entirely separate piece to elucidate how the Bengalis have a great sense of love respect and reception for their Assamese brethren. However, I would present you with one curious situation- Barak Valley has one Central University – Assam University. After the implementation of Lyngdoh Commission recommendations, the executive head of the Union was deemed to be the President of the Students’ Union. Since you consider Barak Valley to be averse to the Assamese, what do you expect of the University with more than 70% Bengali Students? What do you expect of the University which was an offshoot of the Bengali language movement of Barak Valley?

Well, Mr. Rajguru, as a matter of fact, with a resounding voting margin, a university with more than 70% Bengali speaking population, voted for two Assamese speaking Presidents in the first two terms of the Students’ Union. We would, however, be indebted to you if you can cite a similar instance of reception and respect for the Bengalis in any premier University of Bramhaputra Valley. But Mr. Rajguru, your ‘hostile territory’ has never evidenced any resentment.

“It is one thing to be taunted by the residents of neighbouring states but it is entirely different to face xenophobia from the people we consider as our own brethren. And when a preeminent voice like Rajguru cannot shroud his xenophobia, we are pushed to the brink of saying – Not a hostile territory but a living embodiment of institutionalised apathy,”

Thirdly, you complain of the inadequate usage of Assamese in Barak Valley.

Mr. Rajguru, an intellectual of your stature obsessively seeking forced homogeneity of a language across a diverse state like Assam is so unfortunate. May I remind you of the basic constitutional mandate of ensuring linguistic independence of cultural minorities? Article 29, in the form of a fundamental right, protects the interests of the minorities by making a provision that any citizen/section of citizens having a distinct language, script, or culture have the right to conserve the same. Are you vouching for a curtailment of a fundamental right enjoyed by the citizens of Barak Valley?

And in case, if you are wondering Mr. Rajguru, no one looks down upon anyone who speaks Assamese in our Valley. In fact, you will be amazed to know that there are Assamese hamlets in our Valley that have been historically linked to this land. Many historical accounts suggest that they settled here in order to escape the Burmese onslaught. Are you privy to any information that suggests that they are living under any form of linguistic hegemony?

Of all the outrageous insinuations Mr. Rajguru has made in his tweet, this must top the chart. If one can trouble Mr. Rajguru with some statistical facts about Barak Valley, he would understand that the valley is heavily underdeveloped in terms of the Human Development Index ( HDI), infrastructural projects, employment, connectivity, etc. More so important, since the dawn of independence, despite serving this blessed land as proud children of Assam, we have to live under a persistent suspicion about our belonging. It is one thing to be taunted by the residents of neighbouring states but it is entirely different to face xenophobia from the people we consider as our own brethren. And when a preeminent voice like Rajguru cannot shroud his xenophobia, we are pushed to the brink of saying – Not a hostile territory but a living embodiment of institutionalised apathy.

It is all the more disconcerting to find that Rajguru chose to belittle the people of our Valley when six Assam Police personnel were martyred in Barak Valley while protecting the boundaries of the state of Assam. In no time, the Chief Minister of Mizoram, Zoramthenga, retweeted Rajguru with the caption – ” Facts be told”. The people of our Valley have the academic acumen and the historical grip to read Chief Minister’s retweet as – “Divided by history, battered by disputes, United by xenophobia.”

Anirban Roy Choudhury is the publisher of this article and the responsibility rests with him. For feedback, write to: barakbulletin@gmail.com

Alternate rail-route for the people of Barak Valley is a necessity, Greenfield…