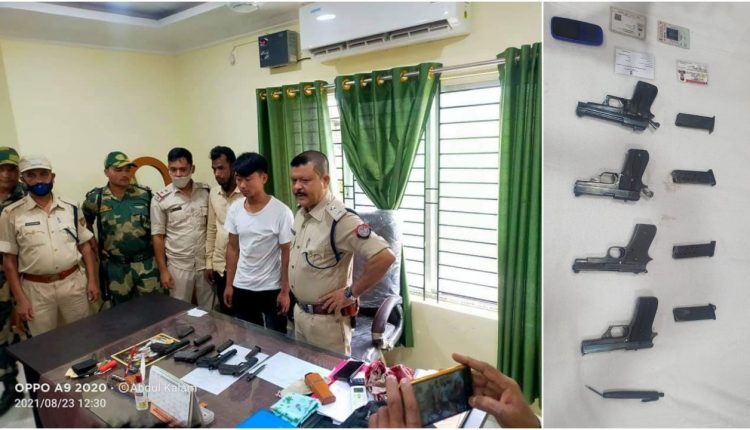 The Badarpur Police in collaboration with the Border Security Force (BSF) has been able to apprehend 2 persons carrying guns while boarding the Silchar-Guwahati train today.

The incident happened at the Badarpur Railway Station on Monday morning, when based on a secret tip-off, the Badarpur police in collaboration with the BSF forces searched the train situated at the station which had arrived from Guwahati. After a thorough search, the police were able to recover 4 pistols hidden under the possession of 2 persons, who were immediately arrested and brought to the Badarpur police station.

While addressing the media, Deputy Superintendent of Police, Karimganj D Sharma said, “This morning, based on a secret intel, the Badarpur police led by OC Anup Kalita in a joint operation with the BSF forces, searched the Silchar-Guwahati train that had arrived today at the Badarpur Junction.”

He added, “After searching the bag of the culprits, 5 pistols were recovered, of which 4 are 7.65 mm pistols and the other one is a pen pistol. Both the culprits were immediately arrested and brought over to the Badarpur police station for interrogation, and the guns were seized. No bullets or ammunition were found with the pistols, and all the guns were empty at the time of seizure.”

The apprehended duo who were caught smuggling the guns were Nurul Islam, from the Baraigram area of the Karimganj district, and H Liang Khiyamon from Tuensang district, Nagaland. According to DSP D Sharma, the duo arrived from Dimapur, Nagaland to Lumding boarding the Moriani Express train. Then they boarded the Silchar-Guwahati train from Lumding to arrive at Badarpur where they were caught by the police.

He also said that they’re still in the process of unearthing where the duo was headed and where they were trying to transfer the guns. As of now, the investigation is still on and further information is yet to come out in the open.