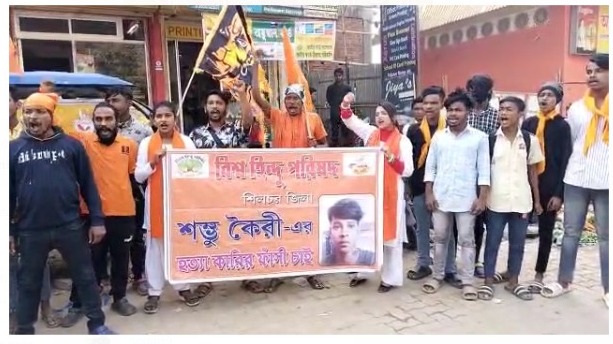 Viswa Hindu Parishad and Bajrang Dal are protesting in Silchar along with the entire nation demanding the hanging of Selim Uddin who killed Shambhu Kairi, a member of Bajrang Dal. Today, the members of Viswa Hindu Parishad and Bajrang Dal staged a strong demonstration at Chengkuri Road in Silchar. Along with the demand of execution of the killer of Shambhu Kairi, the Bajrang Dal appealed to the government for a financial assistance of Rs. 50 lakhs to Kairi’s family and a job for one of the family members. Bajrang Dal is organising agitation in every ward of Barak Valley and the protest will continue till their demands are met.

It maybe mentioned that few days back, Shambhu Kairi, a member of the Bajrang Dal was brutally killed by a youth named Selim Uddin. The accused Selim Uddin has been arrested by the police and sent to jail, although Bajrangis are demanding the execution of the killer and are protesting against the brutal killing in Barak Valley as well as the entire nation.

Speaking to reporters a member of Bajrang Dal said, “We are protesting against the brutal killing of our Bajrangi brother Shambhu Kairi on a ward basis in Barak Valley alongwith the entire nation. Accordingly, we have organised a demonstration in Chengkuri Road today. We want to say to the government that it’s been many days since the killing but justice is yet to be meted out. We have faith in the government but how long that faith will last is a big question because a fire is burning in our hearts as our minor brother was killed at the age of 16 or 17 years. What was his fault that is our question to the government and Hindu society. Was he killed for doing Bajrang Dal or because he was a Hindu by faith?”

He added, “We are organising protests since so many days but justice is yet to be administered. His family is financially weak but no assistance has been given by the government yet. Will sanatani Hindus be always killed like that? And will we always organise protests like that and pay tributes to them? How long will we do that? We demand an NIA probe into the killing and till that our protests will continue.”