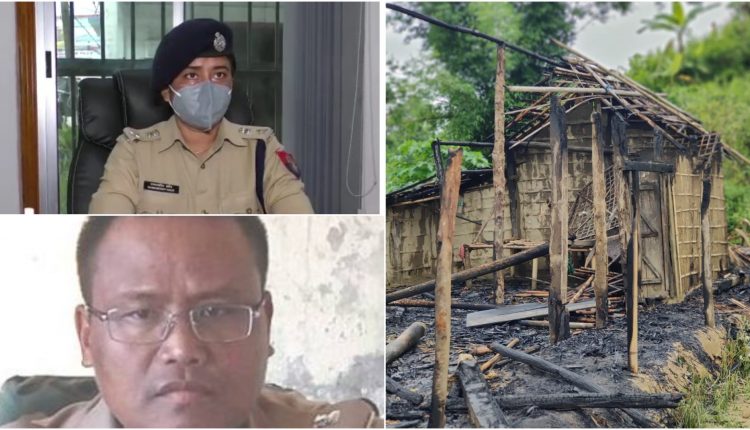 Assam and Mizoram are again at loggerheads. The border dispute between the two states continues with a blend of violence. Two houses were gutted in fire in Hailakandi a couple of days back, reminding both the states about the terrorising activities in late 2020 and early this year. The dispute went so far that the Ministry of Home Affairs had to intervene and deploy Central Forces to bring the situation under control.

Then chief secretary of Assam, Kumar Sanjay Krishna discussed the issue with Pu Lalnunmawia Chuaungo, chief secretary Mizoram, but could not reach a consensus. Armed men, most of whom were civilians continued to guard the Mizoram border in Cachar, Karimganj, and Hailakandi. On the other hand, the locals of Lailapur, Dholai with very little or no resistance from the Cachar Police, continued economic blockade disrupting the supply of essential commodities to the neighbouring state. Eventually, Union Home Secretary Ajay Kumar Bhalla had to intervene and call for a meeting with the new chief secretary of Assam, Jishnu Baruah and Chuaungo in Mizoram. One agreed to withdraw armed men and the other promised to resume vehicular traffic to Mizoram. “Status Quo must be maintained,” was the order from the Centre.

Astonishingly, it is BJP and its allies at Centre and both the states and yet the issue is hardly addressed politically. It is left for the bureaucrats to deal with. DC Cachar Keerthi Jalli along with erstwhile SP, Bhanwar Lal Meena visited the border several times. DC Kolasib too did the same. The Mizos had indeed encroached kilometres into Assam and they weren’t always cooperative. In fact, on one such occasion, the DC and SP of Cachar were surrounded by armed civilians all in their twenties and thirties. During an interview with Barak Bulletin, Chief Secretary of Mizoram, Pu Lalnunmawia Chuaungo almost defended the act. “What we saw from pictures is those were airguns. Now, these people are the villagers and the stuff is happening in their village. Because of the ongoing tension, they have probably come out with guns. I don’t think it is to threaten anybody, in fact, I believe they have come out with guns to defend themselves in their own land and that’s all. These are not outsiders, they are the people of that village.” (Click here to read Full Story and check Images)

During the last dispute, which also was the longest such tussle, more than 20 houses were gutted to fire, around a hundred had to leave their houses with bags and baggage and seek refuge in schools and colleges. One man from Lailapur was found dead in Mizoram’s custody, DGP Bhaskar Jyoti Mahanta and Chief Secretary Jishnu Baruah visited the house of the deceased. Mizoram claimed the man was smuggling narcotics while former Chief Minister of Assam, Sarbananda Sonowal said miscreants abducted and killed an innocent resident of Assam. Two schools built and operated by the Government of Assam were bombed within the territory of Assam and yet the Government that was formed by BJP with the motto, “Jati Mati Bheti” remained silent at best. NIA probe was demanded but those demands were never formally tabled.

Mizoram was a part of Assam until 1971. When Upper Painom School in Hawaithang was bombed in October 2020, the Mizoram Government said, miscreants from Assam have encroached into Mizoram’s territory and that is why the state is claiming “Painom” to be in Assam. Names like Painom still exist in Assam as Mizoram and Mizo people were once a part of the state responded the Assam Government. The former chief secretary of Assam Kumar Sanjay Krishna had told Barak Bulletin, “We are trying to resolve it mutually. Peace should be maintained and constitutional boundaries should be respected by both sides.

His counterpart in Mizoram Pu Lalnunmawia Chuaungo, responded, “There is no demarcation, there is no ground verification. Whatever map has been drawn, it has been drawn on the table on paper without any verification on the ground. None of these boundary lines drawn by the Survey of India is verified on the ground. Survey of India map is based on imagination and their understanding. So, according to us, all the land we claim are within Mizoram.” (To Read the full interview, click here)

After the recent violence reported in Hailakandi’s Gollacherra area, Superintendent of Police, Ramandeep Kaur visited the spot. She said the houses burnt are located within the territory and jurisdiction of Assam. “These are abandoned houses. Residents had evacuated them when there was a scuffle last time,” added SP Kaur.

Her counterpart, Vanlalfaka Ralte, the SP of Mizoram’s Kolasib district, responded, “The abandoned houses that were set ablaze are in Zophai area near Bairabi town within the jurisdiction of Mizoram’s Kolashib.” He added, “Bangladeshis with vested interest creating trouble in Mizoram. These Bangladeshis have illegally immigrated to Assam and are now claiming parts of Mizoram to be their own land. There is no way, Mizos are involved in the burning down of the houses are there is a complete lockdown in Mizoram, they cannot travel to the border to burn houses.”

When asked how he was so sure that the culprits are illegal Bangladeshis, SP Kolashib responded, “There are not many people in Hailakandi who have not been included in the NRC,” he replied. Well, if they are not included in the National Registrar of Citizens (NRC) they could be from anywhere and not necessarily Bangladesh. However, SP added, “We are in discussion with the Government of Assam and SP Hailakandi, we want a peaceful solution to the problem and till then the status quo must be maintained.”

Again the Mizoram is on the offensive while Assam continues with the big-brother approach. The state has a new chief minister and how he handles the interstate dispute between Assam and Mizoram, remains to be seen.