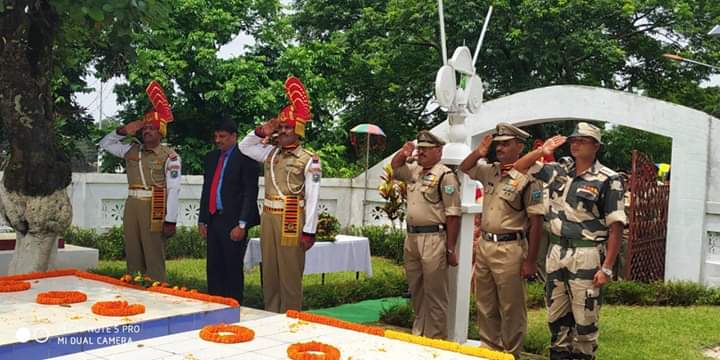 Similar to every year, a function was organised on behalf of the BSF to pay tributes to the martyrs of The Revolt of 1857 at Malegarh, Karimaganj. The function was attended by Karimganj DC MS Manivannan and SP Manavendra Devray. DC Manivannan laid wreath in the memory of the brave soldiers who fought till they fell to the bullets of the British troops at Malegarh.

The Sepoy mutiny is considered India’s First War of Independence where 26 personnels of the 34th Native Infantry were killed in a battle with British regiment. But the sad truth is the incident never got place in history books.

Speaking with the media persons yesterday, Karimganj DC MS Manivannan said that the government is trying to preserve the history of the place and soon it will be developed as a tourist spot. “We are making a film on Malegarh, because there is lots of history behind this place. Recently a pistol and a sword were also recovered, so we will also try to setup a small museum at this place.” DC said.

A high ranked BSF officer said “Under the Ministry of Home Affairs there is a scheme to develop the significant places in the border area. We have sent a proposal to develop Malegarh and Sutarkandi as border tourism spot and the state government has also taken simultaneous initiative for it.”

Assam Chief Minister Sarbanada Sonwal, last month during discussion on faster socio-economic development of Barak Valley at the Assam Assembly said that government is mulling to send a proposal to the Centre for setting up Attari Wagah border like facility at Sutarkandi in the memory of 26 Indian soldiers martyred at Malegarh.