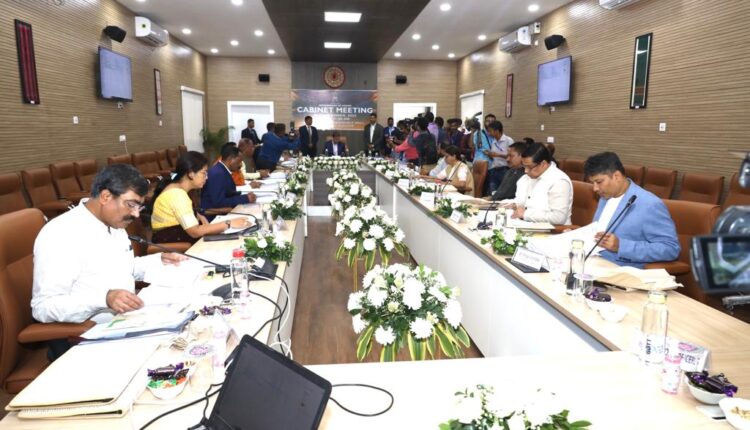 The Assam Cabinet Meeting chaired by CM Himanta Biswa Sarma and the Cabinet Ministers of Assam concluded today afternoon. Later during the press conference, the Chief Minister addressed the media to highlight the discussions and approvals from today’s meeting. Other than various grants and sanctions approved for Barak’s education, health and road infrastructure, the CM has also appreciated the meritorious youths of the valley. In the press conference, the CM also shed light on the recent “Barak Bandh” called by the Barak Democratic Front on November 18. He called this bandh an “insult to the youths” and the government has decided to take legal action against this organisation based on the rules.

The Barak Democratic Front and its allies called for a Barak Bandh on November 18. One of their primary demand was that the students of Barak are being deprived of jobs by the state government. During various meetings, the BDF has claimed that only a handful of students from Barak have cleared the recently held Direct Recruitment Examinations by the Assam Government. During the press conference, the CM slammed all such claims and gave detailed statistics on how many youths secured jobs from the three districts of Barak in the last one year.

About the bandh, the CM has said, “This is an insult to the meritorious students and job aspirants of this valley. The organisations who called this strike should apologise to all these students as they have advertised in front of the whole state and the world that the students of this place are not meritorious or capable of securing jobs. The students of this place are really meritorious and their merit will pave their way to higher places. Be it Karimganj, Hailakandi or Cachar, many students have passed this last recruitment examination and all such claims by these organisations are of vested interest”.

About the number of students that passed the Direct Recruitment Examinations, the CM said, “After Guwahati, the highest number of students that passed this examination are from the centres in Cachar. On average 20% of students passed just from the centres in Cachar when compared to the posts that are vacant. In 5000 vacancies for the post of Class 10 and above, 1000 applicants from Barak Valley cleared the exam and for the post of Class 8 and above, out of 10,000, 1574 applicants cleared the examination just from Silchar centre. Now there are many who appeared for the exam from districts outside Barak Valley, we didn’t count them in this list”.

The CM also mentioned the number of jobs which were secured by the youths of Barak Valley since May 2021, which goes up to 3300. He said, “In the Home department, 708 AB and 268 UB constable posts were filled by youths of Barak. 1054 teachers in different levels secured jobs from Barak Valley in just one year. We gave 3300 jobs here which is almost 10 per cent of the total jobs in the whole state compared to 32 centres against 3 in Barak”.

Many organisations including the BDF during the strike have demanded to reserve jobs in Barak Valley for the youths of Barak Valley. About this argument, Sarma said, “In Barak, there are only 700 vacancies and if we reserve these jobs for the youths of Barak then the youths of this valley will be ruined. They will be deprived like anything. There are many job creations outside of Barak Valley and it needs to be understood that, if the jobs are reserved then they won’t get the chance to apply elsewhere in Assam. There is only one battalion in Barak and if the jobs the reserved, only 200 vacancies will be created every year. The youths won’t get any chance of growth if this is done”.

“We have filed a cost recovery petition”, the CM said, “against the organisations who called the Barak Bandh in Guwahati High Court, as the bandh was called on an unfounded allegation based on the directives of the Guwahati High Court”. The CM reiterated the merit of the youths of Barak Valley and urged them to keep the environment of education safe.