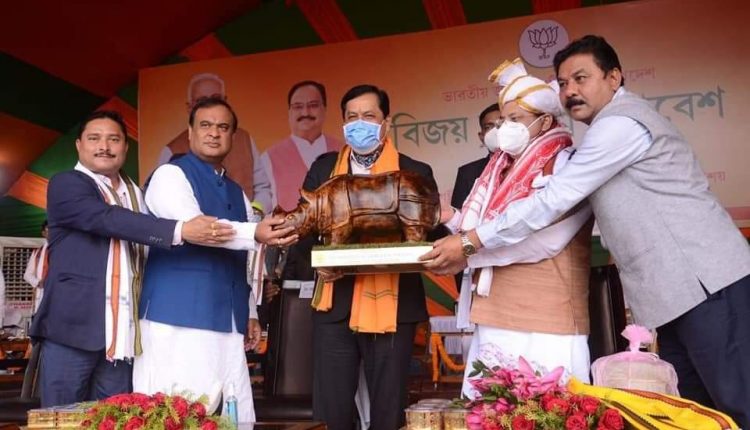 Last month, Chief minister Sarbananda Sonowal had come to Silchar. While attending the 18th Convocation of Assam University Silchar, he said the institution is a fruit of the Assam Movement and Assam Accord. While many thought it was a slip of the tongue, his office shared a media statement, stating the same.

The academicians of Barak Valley were irked by the Chief Minister’s comment. In fact, Silchar MP Rajdeep Roy went further on to say, “It won’t be wise to relate Assam University’s establishment with Assam Accord,” while talking to the media after CM’s event.

While addressing the rally, Nadda paid tribute to state icons like Srimanta Sankardev, his disciple Madhavdev, Azan Fakir, Hem Baruah, celebrated singer Bhupen Hazarika. But local icons like the eleven Bengali language martyrs of Silchar didn’t find a single mention in his speech. He could have also mentioned Netaji Subhash Chandra Bose who came to the city twice for the objective of strengthening the Azad Hind Fauz and also to reactivate the Rani Jhansi Bridgade, but the party president chose not to or maybe the ones who gave him inputs about the place were ignorant of it.

The Valley was also blessed to have the footsteps of Gurudev Rabindranath Tagore who halted at Badarpur Railway Station for a while before visiting Sylhet. This again didn’t find any mention in Nadda’s speech though he repeated the name Barak Valley many times and was talking about the culture of the state throughout.

During the introduction, JP Nadda introduced the only Bengali minister from Barak Valley in Assam Government, Parimal Suklabaidya as ‘Parimal Shukla’. While that could have been just a slip of tongue, what becomes notable is that the party president introduced the Silchar MP as Rajdeep Roy and not ‘Rajdeep Roy Bengali’ which he had done while announcing the names of candidates before the 2019 General Elections to Lok Sabha.

Nadda spoke about the BJP wave that has won almost all the elections which took place in “Assam, North East, and the entire country.” After talking about the party, partyworkers’ achievements, Nadda shifted his focus to Assam Movement. “People must remember that the leader who made Assam Movement a national issue was none other than Bharat Ratna Atal Bihari Vajpayee,” he said.

He also spoke about BJP’s stance on protecting the culture of ‘Ahoms’ in Assam and how the party will leave no stone unturned to safeguard the cultural heritage of Ahom and their language as well. Speaking from a stone throw distance away from Silchar Station where 11 language martyrs were massacred by armed policemen, Nadda seemed like someone appealing to the Bramhaputra Valley voters.

The question remains if this is the new way of assimilation and integration which the CM repeatedly speaks of in his speeches and have the local leaders accepted it. Why is it that the BJP stalwarts, time and again scratch those deep wounds of the Assam Accord in Barak Valley every now and then? Have they completely forgotten the long list of Bengali murders that took place during the movement? Or even how the people and organisations of Barak Valley were never consulted or had a say when the cut off date was fixed for detection of foreigners as an aftermath of the movement? The party president’s speech that ended with ‘Jai Aai Axom’ has left the valley with more questions rather than promises.