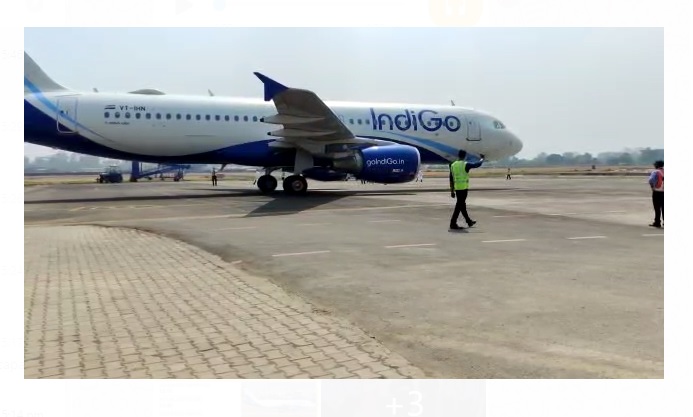 The flight from Bengaluru to Silchar landed today morning and then departed again for Bengaluru in the afternoon. Indigo Airlines, as reported earlier by Barak Bulletin, has started direct flights in the Silchar – Bengaluru route. This is for the first time, the route got a direct flight.

It was earlier revealed that the airlines will start operation in the route from February 21. But later, it was rescheduled to March 2. Accordingly, the flight started its operation today. Director Silchar Airport PK Gorai said that the airlines had asked for approval which the Airport authority provided after evaluating the necessary factors.

He is of the view that the direct flight will benefit the commuters of Barak Valley. Director Gorai informed that the flight will operate three times a week on Tuesdays, Thursdays and Sundays. “Once the flight operates for a month, we will get an idea about the demand in this route,” added the director.

The official page of the Silchar Airport posted, “Historic moment for Silchar Airport as the 1st direct Bengaluru-Silchar-Bengaluru flight of IndiGo 6E 6114 landed at 1130 hrs with 155 passengers on board. Flt 6E6118 departed for Bengaluru Airport at 1210 hrs with 144 passengers. The load factor of the flight is awesome and augurs well for Air Traffic scenario at Silchar.”

MP Rajdeep Roy, who was always vocal about the necessity of a direct flight in the route thanked minister Hardeep Singh Puri. He has also extended his vote of thanks for the low-budget carrier Indigo Airlines for starting service in the route. “This will benefit the people of Barak Valley who travel because of treatment. The direct flight will be helpful for students and their guardians too,” said MP Rajdeep Roy.