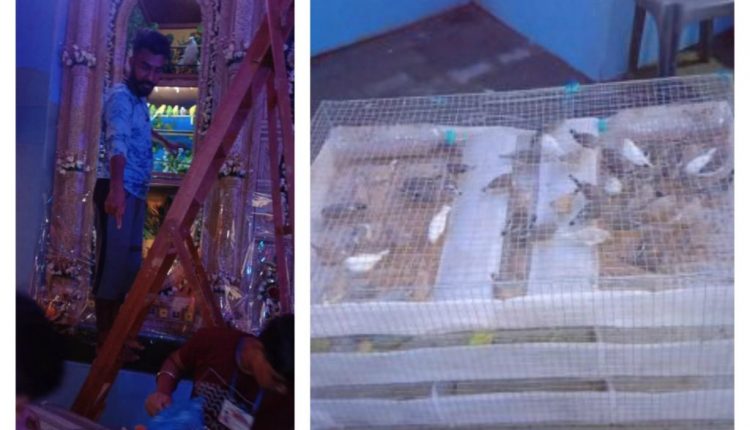 A team of forest officials led by DFO Sunny Deo Choudhury visited the Kalibari Road Durga Puja Committee’s pandal today afternoon (5 October). Under the guidance of the DFO, all the cages have been dismantled.

Deputy Commissioner, Cachar, Laya Madduri too spoke with us. She said that earlier in the day she read a report that a bird has died in the pandal premises, “I asked the forest department to look into the matter. While the Puja committee said that they have done all the necessary arrangements to pet the birds inside, if birds are dying that means something is not suitable. I had asked them yesterday too to remove the birds, today after reading reports, I spoke with the forest department. Now the committee said they will send the birds back from wherever they got it,” said Madduri.

The Puja committee said time and again that it had all the necessary permissions to pet the exotic birds which they have transported from various parts of the country. Their plan was to decorate the pandal with live birds as that would make the ambiance more “eco-friendly and natural”. A video went viral on social media which featured the birds inside the cages. The audio of that particular video irked people all around and led to a social media outrage. The audio revealed that the birds were kept in a loud environment and mass opinion was that the environment is not at all nature-friendly.

Minister of Forest and Environment, Government of Assam, Parimal Suklabaidya was quoted by Indian Express saying, “I am aware of the fact that birds are being caged inside improper atmosphere but we cannot take any immediate action because these birds are not scheduled under The Wild Life (Protection) Act, 1972. Officials of our department visited the pandal on Friday and we have requested the organisers to choose humanity over entertainment. I hope they will maintain this.”

Moments later, the DFO confirmed that the team of forest officials reached the pandal and the committee is dismantling the cages.