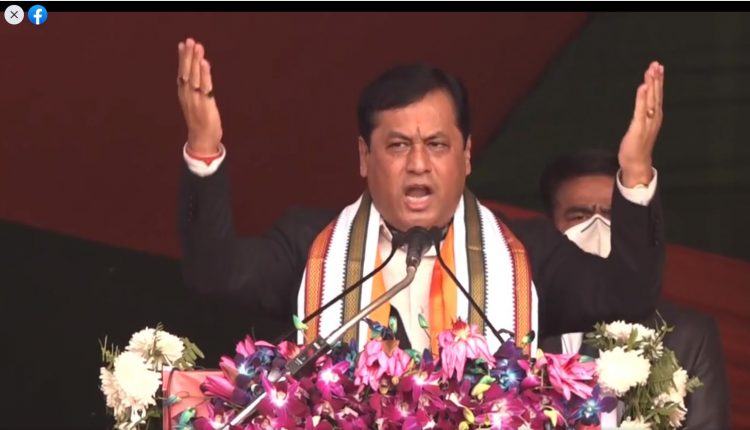 Chief Minister Sarbananda Sonowal’s speech in Silchar was welcomed throughout with thunderous applause. The chief minister started his speech with fluent Bengali that got him the attention of one and all gathered at Police Parade Ground. He said that for Assam to become a strong, developed state, it is important for Barak and Bramhaputra Valley to remain assimilated.

Echoing Prime Minister Narendra Modi’s oath – ‘Sab Ka Sath, Sab Ka Vikas, Sab Ka Vishwas’ the chief minister said that the BJP government in Assam works for the betterment of all the residents of Assam irrespective of their caste, community and creed.

He took a jibe at the opposition and said, “Congress left Barak Valley deprived, it is the BJP government in the last four years that took decisive steps to develop Barak Valley. Congress got six medical colleges in seventy years, we sanctioned eight in four years,” said Chief Minister Sonowal.

Adding, “Let me tell you all my statesmen, Congress, AIUDF will not develop Barak Valley. To have a developing Barak Valley mushroom in the days ahead, it is important to have a BJP government in the state. Today, at this Hankalp Yatra, let us take the oath that we will work our hearts out to ensure that BJP wins all 15 seats in Barak Valley.”

Due to the outbreak of a coronavirus-induced pandemic, more than 45,000 youths returned to Barak Valley from their respective place of work. They lost their jobs, and today, crying for employment. “To address the issue, I promise here today, Barak Valley will soon get an Agriculture University which will uplift agricultural activities in three districts of the valley, Karbi Anglong, Dima Hasao,” the CM made the landmark announcement.

He also spoke about the mini secretariat in Silchar and how the government intends to shift or at least have a division of key offices in the mini secretariat. The chief minister touched the sentiments of Barak Valley by evoking emotions associated with the river itself.

Though BJP president JP Nadda ignored the issue of NRC, CM Sonowal did not. Without using the term “NRC” he made a huge yet polarising statement. “BJP will assure security to all Bengali Hindus living in the state. They are an integral part of the larger Assamese culture,” said CM Sonowal.