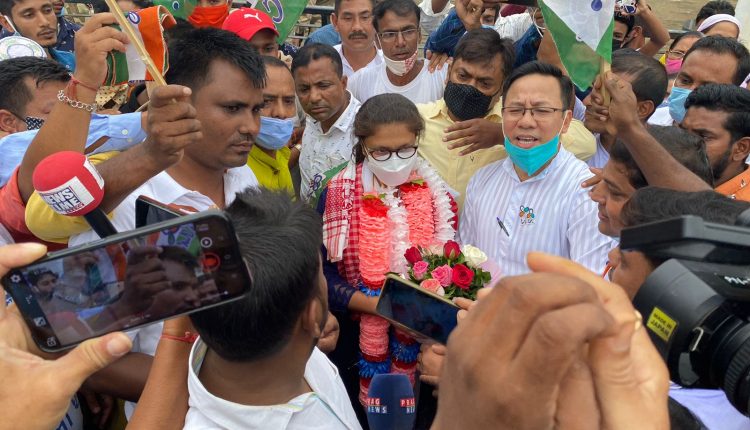 “Booth Committee President’s post is all that I’ll ask for,” Sushmita Dev after reaching Silchar

A crowd of around 200 individuals reached Silchar Airport to welcome Sushmita Dev who recently joined the Trinamool Congress from All India National Congress. Most of her loyalists in Congress have also switched sides to join her and were spotted today at the airport.

From Kumbhirgram Airport, a procession of around 500 cars followed her to Cachar Club at the heart of the town. The supporter played “Khela Hobe” as loud as they could to make it a grand event. All India Trinamool Congress’ Cachar District General Secretary, M. Shanti Kumar Singha welcomed her with a high decibel speech which the former All India Mahila Congress President didn’t like. Singha almost announced Sushmita Dev as the Rajya Sabha MP, however, she interrupted and said, “I have joined TMC without any conditions.”

Sushmita Dev, in her speech, thanked the people who gathered to welcome her. “It is going to be a long and hard fight for us, get ready,” she said. Adding, “Municipality election is next, Panchayat election is knocking at the door but we must not rush and should always remember that we are here for the long run. Me joining TMC is not a short time arrangement. I have joined the party with a vision.”

Speculations are rife that she will be in charge of party’s Tripura Campaign. Dev insisted against drawing conclusions as it has just been three days she has joined the TMC. “Booth Committee President is the only post that I will officially seek and leave it for the party to decide if I deserve it. Also, here in Cachar, we all partyworkers and we don’t have any leaders. We all are equal and at the grassroots. We will build the party, the cadre-base from the grassroots level and once we have a cadre we will think about leaders,” added Dev.

Daughter of former union minister and one of the all time tallest leaders in Cachar Congress, Sontosh Mohan Dev was time and again praising Mamata Banerjee who rebelled out of Congress to form her own party. “Mamata Di has proved that a party like Trinamool Congress is essential in many parts of the country and not just West Bengal. The way she defeated Modi-Shah led BJP in the recently concluded elections in Bengal shows her acceptance among general public as a leader. When I told her that we will build a cadre base here in Cachar, she gave her blessings and said she will visit Silchar to attend a workers’ meet. The ball now is in our court. The harder we will work as a team, the more success we will attain,” asserted Dev.

Though it was a warm welcome for Sushmita Dev, this is just the beginning. At BJP’s bastion, it will be a herculean task for her to establish the TMC. Moreover, in today’s gathering, many had visited to witness the homecoming in a different avatar. While she has a significant following because of her reputation and family influence, it remains to be seen how long they continue to support her. Also, she will have to get thousands out of Congress and BJP to make TMC a formidable force in Cachar or Barak Valley. She has always got the cadre-base served to her on a plate, this time she needs to build it herself which will remain a challenge. “Khela Hobe” she said to conclude her first official address as a member of the TMC.