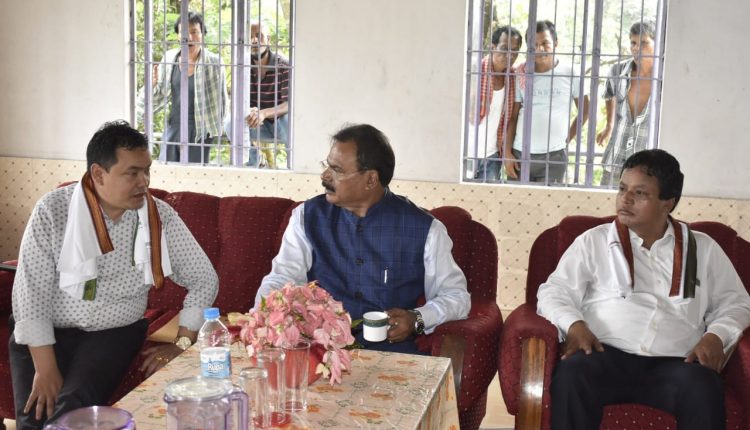 By barakbulletin On October 10, 2021 - 6:40 pm
Share
A ministerial level meeting was held between the two states of Assam Meghalaya last Saturday to resolve the dispute. The Meeting was held at the wayside amenity of Tourism Department at Ratacherra village in East Jaintia Hills District.

Assam Industry and Commerce Minister Chandra Mohan Patowari and Meghalaya Home Minister Lakhmen Rymbui led their respective delegations. Also present were two Deputy  Commissioners Keerti Jalli (of Cachar) and E.Kharmalki (of East Jaintia Hill District), Cachar Superintendent of Police Ramandeep Kaur and Meghalaya MLA Shitlang Pale. MLA Katigorah Khalil Uddin and Circle Officer of Katigorah Kaveri Rongpipi also took part in the high level meeting.
Both sides during the meeting laid down procedures for resolving the border dispute. Later on addressing the media, Minister Chandra Mohan Patowari said that the meeting was successful and both the sides also exchanged relevant documents. However, no conclusion was reached and the next meeting in this regard will be held in Shillong. Meghalaya Home Minister Lakhmen Rymbui also termed the meeting as fruitful and added that the next meeting will be held before 30 October, 2021.
Deputy Commissioner, Cachar also informed that important issues revolving the border crisis came up for discussion. She was hopeful that soon the bottlenecks would be resolved and an impasses could be achieved.