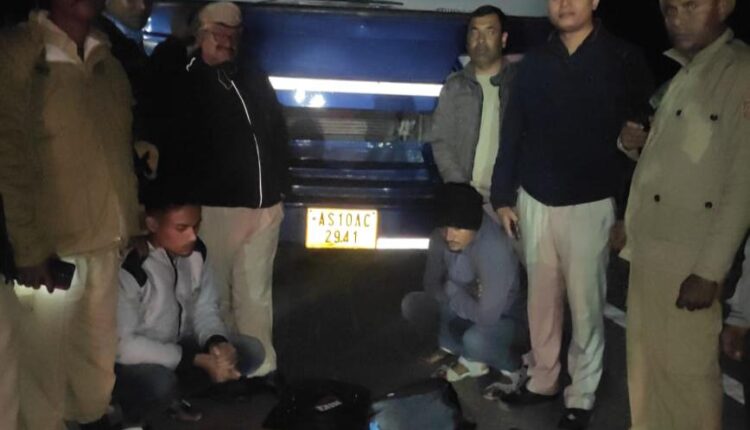 A huge quantity of narcotic substances was confiscated by the Cachar Police last night from a night super bus in Borkhola. The narcotic substance, suspected to be marijuana weighed around 24 kilograms has been found from the possession of two drug peddlers, among them, one is a resident of Tripura. The bus was headed to Guwahati and the packers of marijuana were smuggled into Assam from Tripura. The police have arrested the two and a case has been filed in this regard for investigation.

On November 24 at 11:30 PM, Borkhola Police stopped a night super bus bearing registration number AS 10 AC 2941 headed to Guwahati at the check gate. Based on secret intel, the bus was searched for narcotic substances and the police were successful in finding 24-kilogram ganja from the bus. The driver of the bus along with another passenger in the bus who smuggled the nine packets of ganja were also arrested during the operation.

The two drug peddlers, Dinom Dutta of Tripura and Najimul Haque who was the driver of the bus, from Karimganj were arrested by the police. In this regard the SP Cachar, Numal Mahatta said, “The market value of the confiscated narcotic substance is estimated to be around 2 lakhs. The 24 kilograms of ganja was smuggled from Tripura and headed for Guwahati. We have filed an FIR and are interrogating them in police custody”.