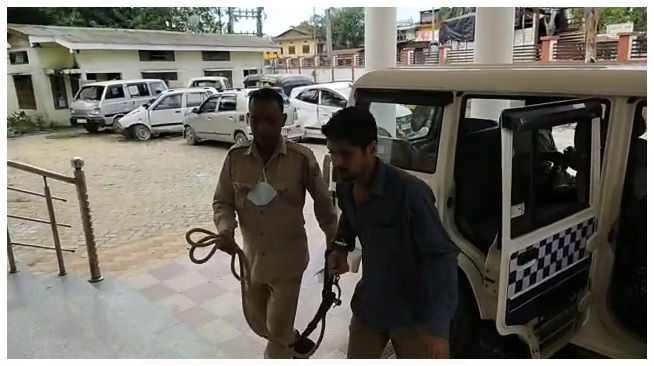 Boy in Cachar thrashes mother to death, father files FIR against own son, gets him arrested

“My mother was mentally imbalanced and she started talking nonsense after I reached home tired. So, I lost it and pushed her,” says 34-year-old Amarjit Deb after killing his mother. “He has not pushed his mother but literally thrashed her to death,” says Apurba Kumar Death, father of a son who killed his mother.

The shocking incident occurred in Gosaipur part V, Udharbond. “My son was somewhere outside. He returned home riding his cycle. As soon as he entered, he dragged his ailing mother to the verandah and started kicking her. Not only that, he got a bamboo from somewhere and started beating her with that. Once I went to stop, he started beating me. Neighbours came to stop him but could not,” says Apurba Kumar Deb.

He went and filed an FIR at the local Police station alleging that his son, Amarjit Deb has murdered his wife Sumati Deb at his own residence. Based on the FIR, Cachar Police arrested the 34-year-old. “He called his brother – my younger son and discussed something. Immediately after that, he started beating her. I was shocked as anyone would be and have no clue what irked him. Also, if something irked him should he go and murder his own wife?”

Police recovered the dead body and sent it to Silchar Medical College and Hospital for autopsy. “My mother started shouting at me and after a hard day at work, my mind could not take it. And then my father joined too, that is when got engaged physically,” he said when confronted by the press standing outside the Police station.