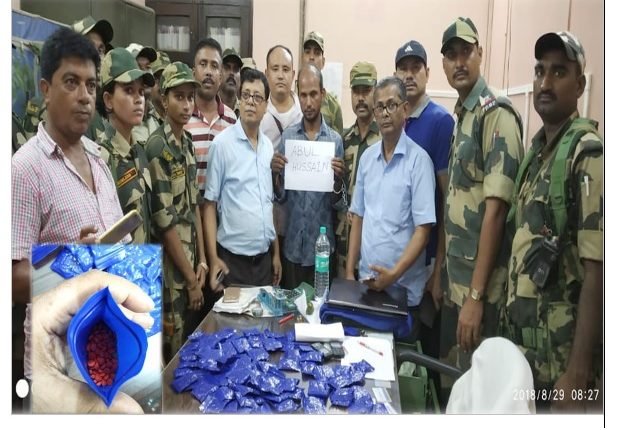 By barakbulletin On August 29, 2018 - 5:40 pm
Share
On August 28, 2018 superintendent of Custom, Silchar approached Deputy Inspector General (Intelligence), BSF with information that YABA tablet (METHAMPHETAMINE) and other drug materials are stocked in a house of a drug peddler in Lakhipur area of district Cachar. A detailed operational plan was made to nab the drug peddler and recover psychotropic consignment.

In the wee hours of August 29, 2018, custom official along with BSF troops, in a joint operation cordoned the suspected house and searched for hidden drug items.During search, the drug peddler namely Abul Hussain, son of Akoddar Ali, resident of Ward No. 06, Hmarkhaulen village, PS Lakhipur, district Cachar was apprehended. 36,600 Yaba tablets approx worth Rs. 3.66 crore in International market were recovered from his house. Yaba tablet is a psychotropic substance normally manufactured in Myanmar and smuggled to Bangladesh and other parts of India through drug peddlers living in Karimganj and Cachar district.

“It is a known fact that this tablet is playing havoc in the states of Manipur, Mizoram, Nagaland and Assam where youths are getting addicted to it. Border Security Force is putting its best efforts in co-operation with other sister agencies like Custom, DRI and Police to foil such attempts of smugglers and drug peddlers. It is leaving no stones unturned to unearth the drug smugglers operating in its area of responsibility,” said the spokesperson of BSF in a media statement.

The media statement added, “The arrest of drug peddler and recovery of such huge quantity of Yaba tablets on an specific information of custom officials and meticulously planned and well coordinated operation of BSF troops of 131 Bn BSF will act as a deterrent to the smugglers of Barak Valley.”In another incident, an intelligence official of BSF ASI S Debnath, intercepted a smuggler namely Nazural Islam, 37 years alias Noji S/o Abdul , r/o Lamajour North, PS Badarpur district Karimganj on International Border Road at about 0800 hrs today.

“As per information received earlier, the individual was suspected to be carrying Yaba tablets tied to his stomach. The smuggler was asked by BSF official to stop. Having come to know that he would be caught, the smuggler suddenly attacked ASI S Debnath with machete (Dao) that he was carrying. As a result, the ASI got severe injuries over his left eye brow and left hand,” read the media statement.

The smuggler thereafter fled away from the spot. “Although, BSF troops could have fired, they did not do so to avoid civilian casualties, since civil villagers are very close to IBB road,” the press note added.