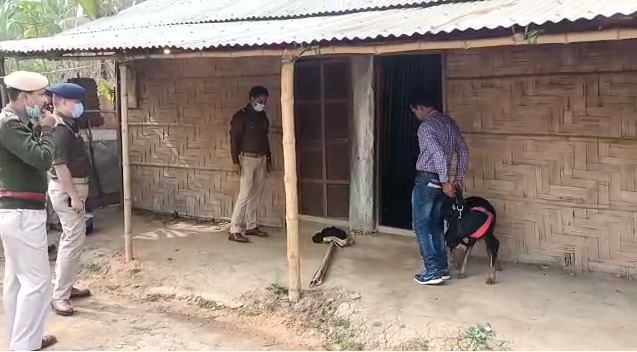 Brutal: Man murdered in Cachar with bamboo, stabbed in the eye

A brutal murder in Cachar district’s Khasipur part I area. Today morning, a local resident Shankar Bauri saw a man lying dead at a house near Ballab Bhai, Higher Secondary School. He called for help and locals gathered. Soon, they found out that the man lying dead is 38-year-old Nipendra Ghosh. He used to live as a tenant at a nearby house.

Officer in charge of Silchar Sadar Police station, Ditumoni Goswami rushed to the spot and started investigating the matter. A dog squad was also called in.

According to the locals, the place where the dead body was found is owned by Mridul Das and he is currently in Guwahati. He had rented the apartment to Munna Namasudra, who is absconding. The police have also identified Munna Namasudra as a suspect.

Explaining the circumstances under which the body was found, our correspondent on the spot said, “The man has been allegedly murdered by beating with a bamboo stick. His eyes were stabbed, and a knife was also found engraved in his eye socket.”

Former minister, Ajit Singh rushed to the spot and urged Police to investigate the matter.