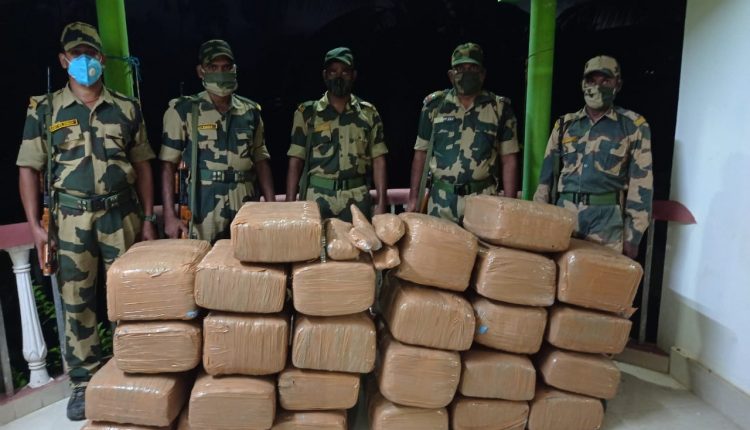 In a joint operation conducted by the Border Security Force (BSF) and the Directorate of Revenue Intelligence (DRI), a huge amount of cannabis (ganja) was seized along with a Mahindra truck yesterday in Katigorah. At around 10 pm on July 26, based on a secret source, the BSF 1st Battalion in collaboration with the DRI intercepted a Mahindra truck near Katirail, Katigorah on NH-6. The joint ops party searched the vehicle thoroughly and recovered cannabis wrapped in 26 big-sized packets and 4 small-sized packets concealed in different cavities.

The joint ops party detained the co-driver but couldn’t apprehend the driver as while intercepting, the driver, sensing the presence of the BSF and the DRI, immediately fled the scene. According to the BSF press release, the Mahindra truck, bearing registration number WB-73E-1445, carrying the consignment of cannabis was coming from Tripura and was bound for Guwahati.

The total weight of the seized cannabis is 270 kg whose market value is around ₹50 lakhs. The name of the detained co-driver is Gourab Kumar, S/O Subhash Prasad Dervey of Ratanpur village in the Banka district of Bihar.