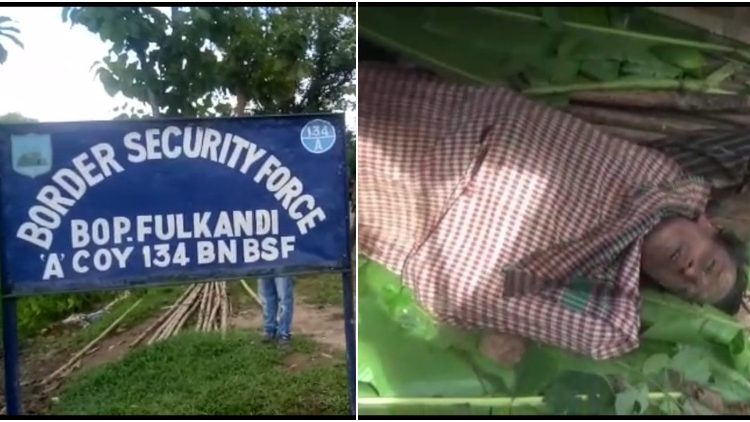 By barakbulletin On August 24, 2019 - 7:16 pm
Share
Shocking reports coming in from Fulakandi border in Karimganj. The dead body of an unidentified man has been spotted right next to the fence in Fulkandi.

Speaking to a media contingent, a mostly dodging BSF spokesperson said that they found a dead body, one fence-cutter and the investigation on the same is on. He refused to reveal any further details about the alleged firing. He also said that the BSF does not know if the person dead is an Indian or a foreigner.

However, highly placed sources in BSF told our correspondent that a group of cattle smugglers had tried to ambush at the BSF jawans and in response to which the jawans fired. A senior official on condition of anonymity said, “We have sealed the fence and cattle smugglers are out of job. Out of panic, they tried to kill our jawans with a sword from the other side of the border. Yesterday, was the third such ambush from them. There were about 11 or 12 cattle-smugglers who had entered the Indian side of the border after cutting the fence. The Jawans fired at them and one of them died. We recovered fence-cutters, swords, knives and many other deadly weapons.”
The BSF official also added that there are local groups on the Indian side of the border who partner the Bangladeshis in the cattle-smuggling crime. “They are now accusing the BSF of shooting at poor. Because their illegal business is blocked, they are framing our jawans,” said the official.
When reporters asked the BSF spokesperson who spoke with the media if the person dead is a cow-smuggler, the spokesperson replied, “I cannot confirm.”
The locals, on the other hand, accused the BSF and Assam Police of ignorance. and said that both Police and BSF are aware of a footpath through which one can easily walk through the border that raised the rise in cow-smuggling and yet they do absolutely nothing. The BSF spokesperson also admitted there is a footpath but he said that was recently built by cutting the fence.
Local Police will now take over the case and investigate the matter. A Police constable said he was waiting for BSF’s commanding officer to reach and after that, the dead body will be sent for postmortem. Following which they will do their investigation.
What happened in the dark hours last night is still a mystery. What is known is that there is an unidentified dead body, a fence cutter, a couple of other weapons. It remains to be seen if BSF releases an official statement explaining the alleged firing.
AssamBangladeshBorderBSFBSF shot manFulakandiIndiaJawan
Share

Adwoy Purkayastha shares his "Gearing up for Durga Puja 2019" moment; you can share yours