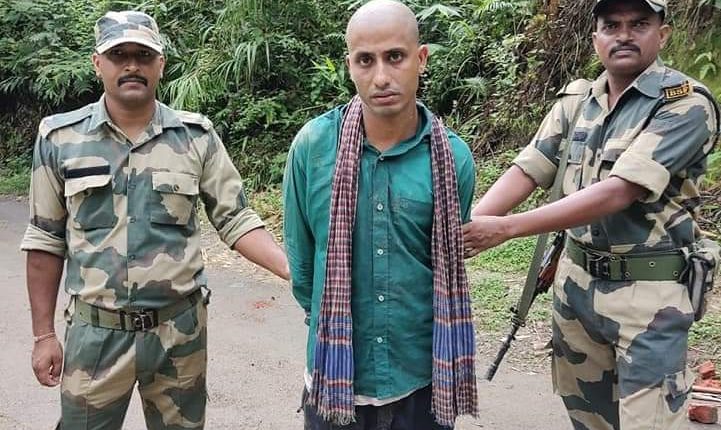 BSF nabs a Bangladeshi citizen in Patharkandi while trying to smuggle out buffaloes; 2 others managed to escape

A Bangladeshi citizen was caught yesterday while trying to steal and smuggle buffaloes from India after entering illegally through the Indo-Bangladesh border. The incident happened in the Sonatola area under the Patharkandi constituency when some jawans of the Border Security Force (BSF) while on their duty late at night caught the miscreant Abul Hossain trying to smuggle buffaloes to the other side of the border.

According to sources in the police, the detained miscreant, Abul Hossain, is a resident of the Bubarthal village of the South Gandhair area under Moulabi Bazaar in Bangladesh. Father’s name is Late Hasid Ali. After the culprit got nabbed by the BSF forces, he was immediately handed over to the Patharkandi police station where he was interrogated. During this interrogation, the accused confessed to his crimes. He admitted that on the wee hours of Friday night, he and two other associates of him infiltrated India through the barbed wire Indo-Bangladesh border, intending to steal and smuggle buffaloes to Bangladesh. But they got caught by the BSF forces who were on duty that night.

The BSF forces fried to apprehend all three of them, but unfortunately, the other two got away and only Abul Hossain could be detained. According to the accused’s statement, his other two associates who succeeded in evading are – Abdul Haque and Ramzan Ali. The Police also confiscated a wire-cutter and a mobile phone from his possession. He is likely to be arraigned in court on Sunday.

It is noteworthy to mention that such instances of Bangladeshi miscreants creating ruckus in the International border area near Patharkandi are nothing new. In the past, many such thieves and smugglers from the country entered India and were caught by the border guards along with the local people on their way to steal the cattle. Many of them even lost their lives due to public outrage after getting caught.