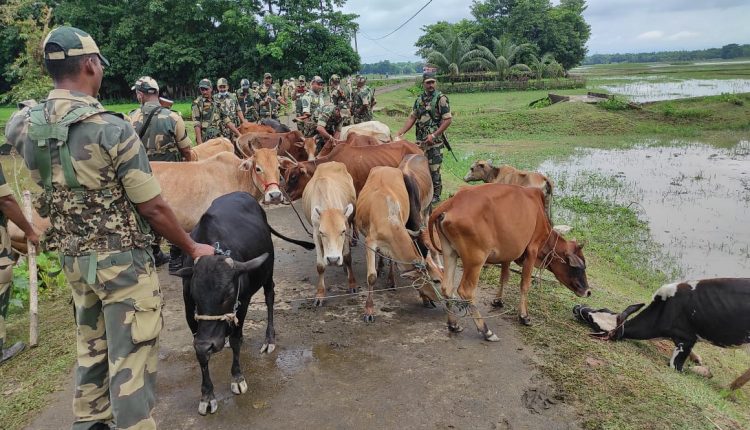 BSF raids cattle market at India-Bangladesh border in Karimganj on the eve of Eid, siezes 16 cows

Eid-ul-Adha, the second biggest festival of the Muslim community, will be celebrated on July 21 this year, which is also otherwise known as ‘Qurbani Eid’. According to the rituals, there is a provision of animal sacrifice on the occasion of this Eid, so people buy different kinds of animals from the market for the sacrificial ritual. Recently, the state government has introduced the Anti-Cow Slaughter bill which has imposed various restrictions ranging from the sale of beef to the sale of cows as well. The court has already ruled that a cattle market cannot be set up within a 20 km radius of the border. However, on Sunday, some people took it upon themselves to sell cows in the Fakirabazar area of the ​​Karimganj district, after which the police and the BSF forces dismantled it.

Ignoring both the court’s ban on setting up a cattle market within a 20 km radius of the border area and the government’s restrictions on stopping the coronavirus, a group of careless traders took the initiative to sell cattle in the border area of Fakirabazar in Karimganj.

According to police sources, on Sunday, the local weekly market of Fakirabazar was seen operating a big cattle market on the eve of Eid. The news reached the BSF and they launched a joint operation with the police. 16 cows brought for sale were recovered from the spot but those who brought them for sale could not be apprehended.