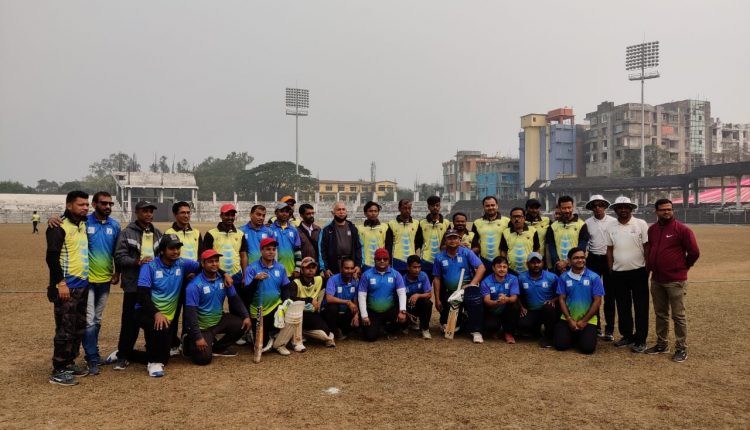 Barak Upatyaka Kreeda Sangbadik Sangstha (BUKSS) organised Jookto Media Cricket Fest began today at Silchar’s Satindra Mohan Dev Memorial Stadium. In this tournament, six teams have been divided into two groups play among each other. The league rounds will be followed by Semi Finals where two teams from each group qualify.

Chasing 116, Aranyak Valley got off to a good start as both Sivasis and Sumit Suklabaidya scored boundaries from both ends. But Sumit played a risky shot and got caught in the deep by Anirban off Biman Sinha’s bowling. Anirban bowled three economical overs (9 runs) and picked one wicket. Biswajit Dutta and Taposh Nath got one wicket each too and restricted Aranyak Valley for 107 to win the match by nine runs.

In the second match of the day, YASE Khobor Heroes were outplayed by Karimganj Press Club. Batting first, the Heroes scored 110 in their 15 overs after losing eight wickets. Karimganj Press Club Strikers chased it down easily in 12 overs with six wickets in hand.

Opener Abhijit Deb got Heroes off to a brilliant start. He scored 27 runs but got no support. Suman Das (16) was the only batsman in the lineup to score in double figures. The top scorer for Heroes was Extras which contributed 41 to the total.

With the ball in hand too Abhijit Deb shows sparks of excellence as he dismissed both the openers early. But good things ended there for the Heroes and instead took a sloppy turn. HK Jashim scored 55 runs with the help of eight fours and one six. He was well supported by Sourav Chakraborty (16) and Mahesh (10) helped Karimganj ease past Heroes’ total. They have won the match with six wickets in hand.

Tomorrow also four teams will play against each other in two matches.