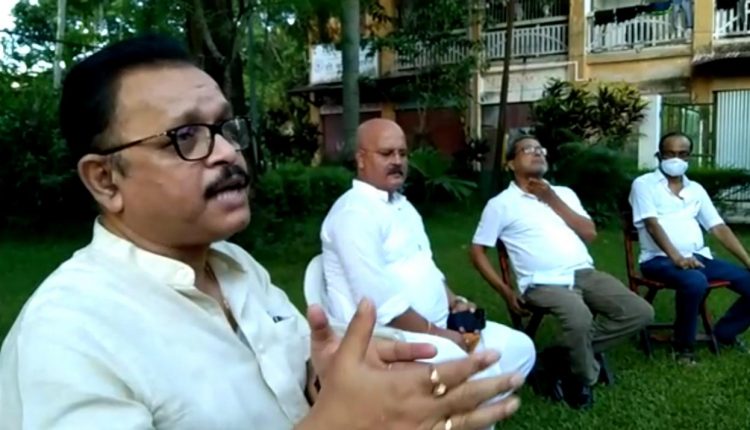 Holding a press conference in Silchar several business and merchant’s Associations oppose the bharat bandh called by Samyukth Kisan Morcha (SKM) the farmers’ body. The bandh, they said, has been called to intensify the farmers’ movement against the new laws tabled by the Government of India. On September 27, the protest completes 300 days.

Left parties, Congress, Banking Unions… have extended their support to SKM’s bandh. The left parties have been campaigning in Silchar too. Apart from the farm laws, they said that the bandh is a mark of protest against price rise of essential commodities, crime against women, the National Education Policy among other government initiatives.

President of chamber of commerce south assam chapter Vivek Poddar, general secretary of food grains merchants’ association Dipak Paul, Mridul Mazumdar president of silchar chamber of commerce , Ashit Dutta held a press conference in Silchar on behalf of the business fraternity. In unisyn they criticised the call for a bharat bandh. According to them the entire business community incurred severe losses due to the Covid induced disruptions. They are of the view that it is “inhuman and counter productive” to call a bandh just before the festive season. They alleged that by calling a bandh certain political parties try to keep their organisational alive. “These bandhs are not for the benefit of the general public. Instead left liberals meet their vested interest at the cost of general public’s loss by calling strike. It has become like a yearly affair as they call for a strike on a monday before puja,” said Vivek Poddar

They urged all the shopkeepers of silchar to keep their shops open and continue with business as usual. At the same time through the press they appealed to Cachar District Administration and Cachar police to provide security and maintain law and order.

These collective resistance and opposition to the nationwide bandh from the business fraternity in silchar might turn out to be a cause of concern. It remains to be seen how the police and administration balances the affairs tomorrow in the district.