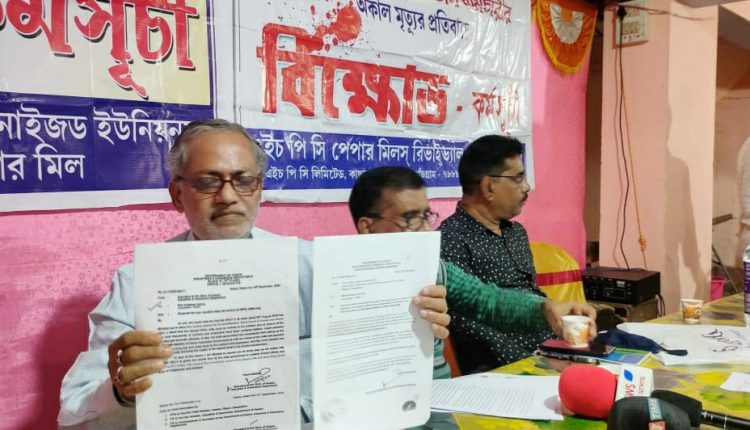 In the process of recovering the Cachar and Nagaon paper mills, the National Company’s Law Tribunal (NCLT) has postponed their hearing 8 times till now. Next hearing is scheduled for Tuesday, but the government is yet to come up with a plan or proposal to recover the two paper mills. On September 10 last year, the Assam government wrote a letter to the NCLT asking for two months, but even after about six months, the government is yet to come up with a recovery plan. Meanwhile, the Delhi High Court has directed the NCLT not to delay the hearing of the paper mills case on January 22, following the hearing of a case of the paper mill workers’ association. In this regard, the date of Tuesday’s hearing is unlikely to be postponed again. If the state government does not attend the hearing or does not present sufficient arguments, the NCLT might declare the two paper mills bankrupt and order their sale.
A press conference was organized in Silchar on Monday on behalf of the Joint Action Committee of Reorganized Unions of Cachar & Nagaon Paper Mills (JACRU), HPC Papermill Revival Action Committee and the families of the paper mill workers. In the press conference, Manabendra Chakraborty said, “The date of NCLT hearing has been postponed 8 times. As per law, if the government cannot come up with any plan to recover the paper mills during the hearing, the NCLT will declare them bankrupt and order their sale. Last year, the Assam government sought time from the tribunal on their own. No action has been taken in this regard since then, now another hearing date has arrived. Recently, a case of Cachar Paper Project Workers Union versus Union of India was being heard. There, the Delhi High Court has clearly instructed the NCLT to reach a decision on the next date and not delay it further. If the NCLT reaches a decision on Tuesday in compliance with the High Court order, the most important role then will be played by the government’s recovery plan.”

He said, “In a similar case recently, the Kerala government has taken on the responsibility of recovering paper mills in their area. The NCLT has agreed to the government’s proposal. Similarly, if the Assam government could come up with a plan, the NCLT might agree. However, if there is no such possibility after tomorrow’s hearing, it will not take long to declare the two paper mills bankrupt. In that case, the NCLT could sell off the entire property.”

They also mentioned that they would hold a religious mourning procession on February 11 in memory of the 80 departed souls of the two paper mills. They said, “A candlelight procession was held on January 25 for the memory of 80 departed employees of the mills. However, the procession was stopped by the administration on the pretext of Republic Day and Corona situation. This time we are on our way again on February 11 with the decision to complete the unfinished campaign. However, this time the name has been given as ‘religious mourning procession’. Since the shutdown of the two paper mills, 6 Hindu and 12 Muslim employees have died so far. Hence, on this day, the paper mill workers will seek peace for souls of the departed Hindus at the Kali Mandir at Silchar crematorium and for departed Muslims at the Fazal Shah Mokam adjacent to College Road. We request every religious institution in the city of Silchar including Ramakrishna Mission, Ajachak Ashram, Satsanga Ashram, Kathia Baba Ashram to pray for the peace of the departed souls of our colleagues on that day. Our request to everyone in this valley is to light at least one lamp and wish peace to the departed soul on that particular day ”

Bringing to notice an old reference, the paper mill workers said, “In the presence of Honourable President, the Chief Minister of our state stood in Silchar and promised that the pending wages of the paper mill workers would be settled within six months. Now if the paper mill is declared bankrupt and sold, we would have nothing left to do. But we will go door-to-door with everyone in the valley to highlight our deprivation.”

Recently, the workers of the paper mill went in front of the residence of MLA Dilip Kumar Paul to demonstrate a peaceful protest. However, as the MLA himself came out and greeted the protestors, direct discussions were held with him and after talking to the Chief Minister over phone, he assured that the process of setlling the pending wages of the workers would begin soon. “As assurances were made, we respect that, but protests will continue in the future,” they emphasized.