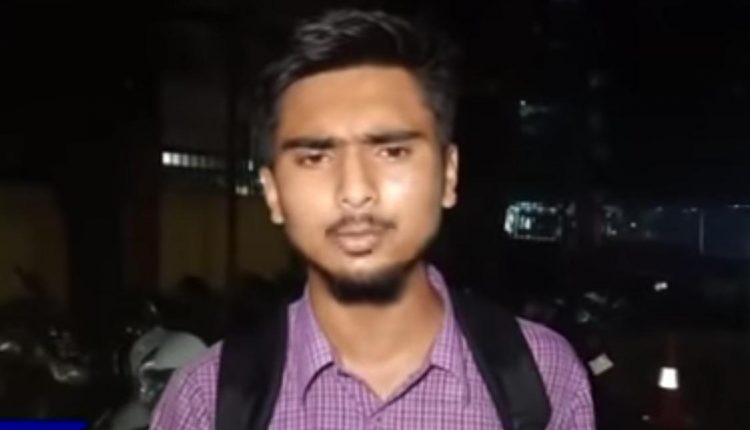 Cachar College Clash: An Islamophobic act or politics against a teacher?

After he uploaded a video, that soon went viral, reactions started pouring in. Political organisations released statements condemning the incident and few went on to demand suspension of the professor. As per reports, an FIR has also been filed in Silchar Sadar Police Station.

Let us go through the allegations made by Nowshad Ahmed and how Manish Pandey responded to them.

According to Nowshad Ahmed (a first year HS student studying in Cachar College), Manish Pandey a teacher of Statistics department had summoned him yesterday inside the college premise and asked the reason behind his decision to wear kurta instead of the common college uniform.

Nowshad shared that he politely responded to the teacher, “Because I am a student from a Madrasa background, I wear kurta to college.” Nowshad in his video statement goes on to say that Pandey asked him to stop wearing kurta in college.

Pandey, in a conversation with Barak Bulletin said that he never questioned or commented on anyone’s apparel. “I am a strict teacher, when I was riding out of the campus yesterday, I heard a young student singing loudly. I stopped my two-wheeler and asked the student his name and what are his subjects. He replied his name was Nowshad Ahmed and he is a student of semester one. He said what subjects he had but he was very arrogant in his approach.”

According to Pandey, Nowshad counter questioned him and asked, “who are you to ask me all this question?” At this, Pandey said, he replied, “If someone is asking you your name and which semester you are in, the person will either be teacher or someone from the administration. Why are you behaving so arrogantly?”

Pandey shared that Nowshad’s reply was even more arrogant, “He told me, no matter whoever you are, you will have to first identify yourself and then ask me questions,” said Pandey.

To Nowshad’s allegation of him prohibiting kurta in college, Pandey said, “I never asked anyone to stop wearing kurta in college. There are so many other students who wear kurta in the same college. Have I ever asked anyone to no do so? Why would I single out Nowshad and make such a rule especially for him. I have so many Muslim students in my classes in college and at home, have I ever discriminated? Why would I treat him any differently?”

While Nowshad and Pandey were having the conversation two other students interfered and questioned Nowshad on his behaviour. Nowshad said the students shouted at him and asked, “how dare you misbehave with Sir in this manner?” to which he said he replied, “If I have misbehaved with him or not, it is for him to decide. I don’t have a personal grudge with you all so you all stay out of it.”

Pandey agreed to Nowshad’s version and made an addition that he asked the students to calm down and not make a scene out of it as that would hamper the reputation of the institution.

Following the interaction, Pandey left the spot while Nowshad with other AAMSA (All Assam Minority Students Association) met the senior officials of the college. What we have gathered from our sources that this meeting had nothing to do with the interaction that Nowshad had with Manish Pandey earlier in the day.

After the AAMSA meeting, Nowshad separated from the clan that met the senior officials. That is when according to Nowshad he was attacked by a few outsiders and students from GC College. Allegedly, the attackers carried a knife to attack him. Fellow students saw Nowshad getting beaten by the mob and one of them rushed to save him. That student too got wounded and eventually, the “outsiders” walked away.

Nowshad was beaten at his own institution by a few outsiders is true for sure and that in itself is a horrible incident and exposes loopholes. On the other hand, Pandey is not feeling safe either. When we asked Pandey about the FIR, he said more than the FIR he is fearing that he might get attacked. A professor feeling unsafe for something which he says he did not do is equally shameful. Pandey said in this matter he would follow what the college administration suggests.

When we spoke with senior professors in Cachar college all of them said that Manish Pandey was too good a person to do something of that sort. They said he does not have a reputation of being a hardliner… On the other hand, we also got to know that Nowshad is an office-bearer of AAMSA, however that does not mean that he is lying.

As it stands now, it is clear that the social media outrage and demanding suspension of the teacher is pretty premature. A deep investigation in this matter is extremely essential and not yet another trial by media. So was it an Islamophobic from a teacher or was it student using politics to defame a teacher teaching in a prestigious government institution. These are very valid questions and administration must solve the mystery.