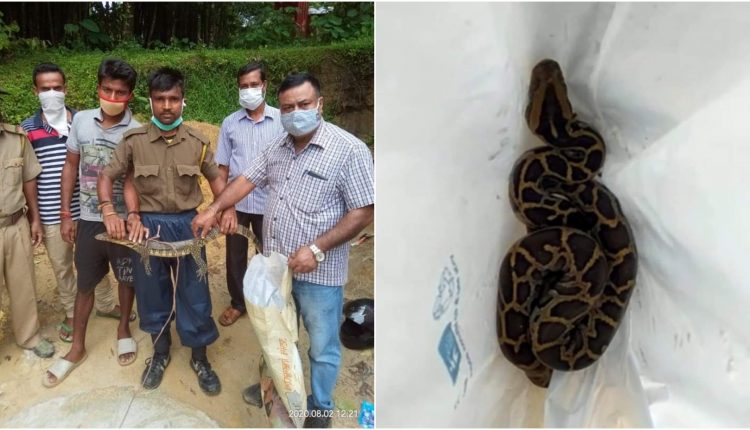 By barakbulletin On August 3, 2020 - 3:20 pm
Share
In yet another success, Cachar Forest Division personnel yesterday, rescued and released a Bengal Monitor Lizard and a Burmese python after receiving information of the wildlife being in distress.

“An SOS was received from Arijit Goswami who informed the DFO Cachar that a Bengal Monitor Lizard ( Varanus bengalensis ) is stuck in a home in Dasgram under Borgalenga GP and require rescue,” a statement said.

“Cachar DFO immediately directed Aurobindo Deb, Dy Range Officer, Sadar Range to rescue the distressed animal. He swung into action and along with K K Nath, Beat Officer, Loharbond Sub beat, Kalyan Bhattarcharya, Forest guard and Amit Goala, casual worker recused the monitor lizard and released it inside the Innerline Reserved Forest at Loharbond safely” the statement added.
In the second such incident, Cachar forest officials received information Kathal road that a Burmese python is stuck and requires to be rescued. “DFO directed its officials to rescue the python. The staff led by Santosh Bhattacharjee, Forester -I and Karimuddin Laskar, Forest Guard rescued the Burmese python and it was safely released in Borail Wildlife Sanctuary.” It said.
Both the species are protected under Schedule I of the Wildlife Protection Act, 1972.
It can be mentioned here that Cachar Forest Divison achieved huge success a few days ago when a truck coming from Mizoram was intercepted at the Lailapur border and 12 exotic animals were rescued from the vehicle. The animals have been now shifted to Guwahati Zoo. “The investigation is going on in this case as to how these endangered species have been smuggled into the country,” said an official.
animals rescuedAssamlizardpython
Share