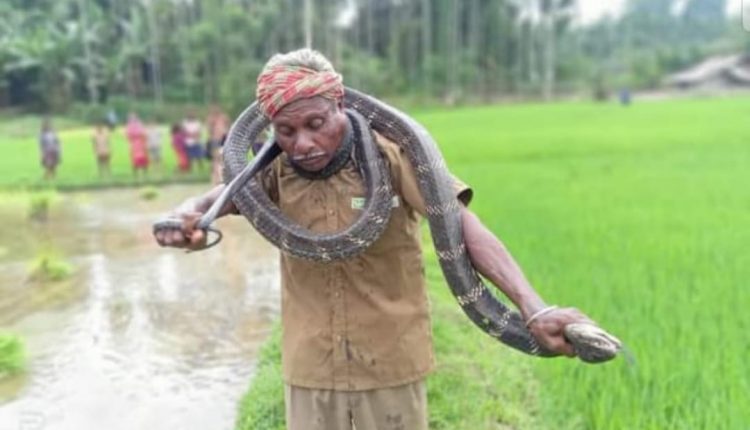 Cachar man catches King Cobra and poses with it only to get bitten to death; "Probably the first victim in Northeast," experts

60-year-old Raghunandan Bhumij is no more. A resident of Bishnupur Village in Dholai’s Rajnagar GP died after he was bitten by a King Cobra. Sunday afternoon, Bhumij spotted a King Cobra and rushed to catch it. The venomous species was at the paddy field and locals said that it tried to escape the grasp of Bhumij but could not.

After Bhumij held the snake by its neck, he started roaming around the village. The snake was trying its level best to escape human attention. The crowd started gathering, locals started filming and Bhumij started dancing with the snake. He was tapping the snake on its head, irritating it with frequent pokes. While he did all of it, he was holding the snake inappropriately.

It just took a moment and the snake ended up biting Bhumij. There was no way back for him. Locals Barak Bulletin spoke with said that they were taking it very lightly. “We kept the body lying as we believe Ojha can cure him with magical powers. Unfortunately, we could not find a good Ojha in the locality and so, he was cremated a day later,” said a local resident of the village.

Divisional Forest Officer, Cachar, Tejas Mariswamy confirmed that the snake was indeed a King Cobra. “Paddy fields are a good habitat for cobras,” said the DFO. He added, “We urge people not to handle snakes etc, it is not only dangerous like this case but it is also an offence under the wildlife protection act. If one comes across any stray wildlife, one should immediately report to the nearest forest office.”

Professor Parthankar Choudhury, Ecology and Environmental Science, Assam University Silchar, “Till date, all over the country, only 3-4 person have died of King Cobra bite. This might be the first record of a King Cobra bite from Northeast that has led to the death of the victim.”

Research at Herpetofauna Conservation and Research Division, Wild Tripura Foundation and wildlife conservation lab, Department of Ecology and Environmental Science, Sumit Nath added, “King Cobra is the world’s most venomous snake, and anti-venom for king cobras is not produced in India. When it comes to their behaviour, King cobra snakes are shy by nature but become aggressive when threatened. They mostly ignore humans and live in the forest areas. But however, occasionally they enter human settlements while chasing the prey.”

Nath was least impressed by the man’s behaviour. “I saw the video and believe the person was intoxicated. And he’s holding the snake by its head, which is quite dangerous because the snake could bite him at any time. And the people around him aren’t holding him back, but rather encouraging him and filming him.”