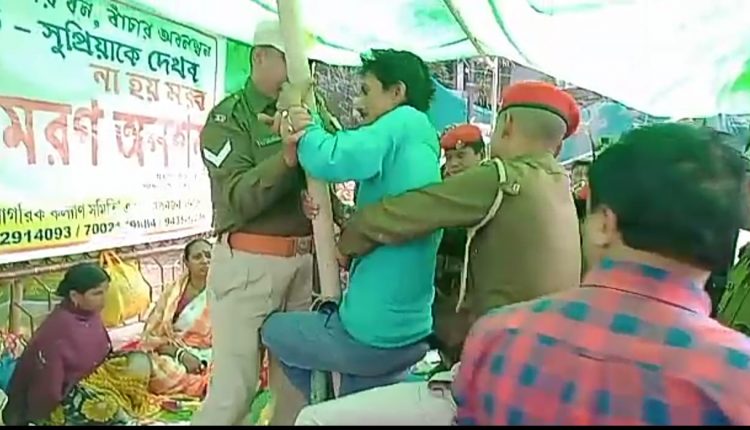 “I cannot leave you here to die.”  This is what a senior official from the Cachar District administration is heard saying. What follows is Cachar Police officials forcing Sunodhan and Somabala Das who sat on an indefinite hunger strike in an Ambulance. The incident took place earlier today at the foothills of Khudiram Bose’s statue in Silchar. Sunadhan and Somabala Das sat on a hunger strike for the second time yesterday. Their demand – Police must find their missing children. Tapoban Road resident, Sunadhan Das is a daily wager and his wife Somabala Das is a housewife. Their children 12-year-old Sourav Das who is a student of Adharchand High School and 5-year-old went missing on June 9, 2019.

Last night, in the freezing cold weather the Das couple remained under the statue and today afternoon the Police officials detained them by force. As per available information, they have been sent to Silchar Civil Hospital. This detention has shocked a large section of people and they have voiced their opinion against Cachar Police’s action on social media.

DSP A J Baruah while speaking with our correspondent said that there are many sides of this story, He said that the police is investigating the matter. “At one stage it looked like people in the family are involved in the kidnapping. However, we do not have anything concrete to share at this stage,” said Baruah.

When asked about the detention, he said, “They were out all night in this cold weather. Today morning, we got their medical tests done and we found out that they need to undergo certain treatment. In the evening we tried to explain this to them, but they did not agree with our advice. Following which we had to force them… Both of them are under medical supervision and as per the latest information, they are doing well.”

From Lakhan Das, Sayantan Chakraborty, Clause 6 to Saara Shabnam, here are the top 10 stories of 2019