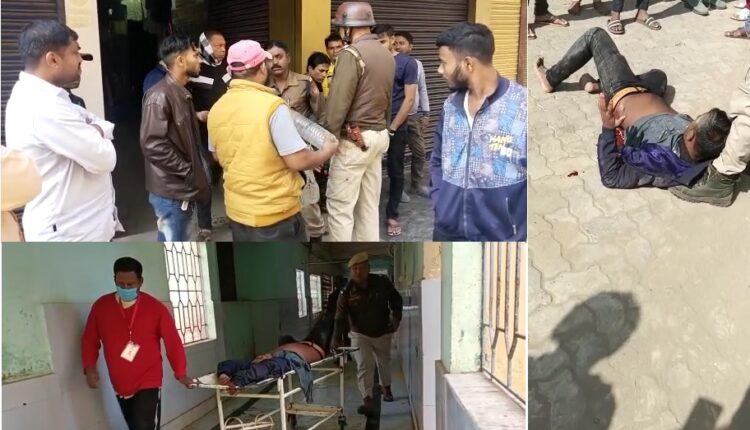 Cachar Police open fire after "most wanted Lal" stabbed a personnel in Gopal Ganj, guns him down

Massive breaking news is coming in from the business hub of Silchar – Gopalganj. According to available information, today morning, police personnel confronted the “most-wanted” car lifter, Afzal Hussain also known as ‘Lal’. Resident of Durganagar, Udharbond, Lal has reports against him in several Police stations of Cachar.

According to available information, Lal was confronted by Police today morning in Silchar. When the Police officials were escorting him to the Police van, he removed his knife and stabbed a Police official, identified as Anwar Hussain. The remaining Police officials on the spot started chasing Lal and opened fire at him near the Silchar Bara Masjid in Gopal Ganj.

One of the busiest streets of the town was shocked to hear the gunshot and soon they saw that a man is lying on the ground, bleeding profusely. An eyewitness who runs a store in the Gopal Ganj area said that they saw police officials chasing a boy and before they could gather anything about the chain of events, they heard the sound of a gunshot. “We rushed out and saw that a young boy is lying on the ground and saying the Police have shot him. While he was running on his foot, it is astonishing that the Police choose to open fire at the busy market area instead of continuing the chase.”

The alleged criminal, Afzal Hussain (Lal) and Police personnel, Anwar Hussain have been rushed to the Silchar Medical College and Hospital. Sources in the hospital informed that Anwar Hussain’s condition is stable and he is being treated further to ascertain the extent of the injury.

As far as the condition of Afzal Hussain (Lal) is concerned, the doctors observed that the bullet went through the sacrum and exited by piercing the umbilical area. “Sonography and other tests are being performed and without diagnosing the report, it won’t be possible to comment on the situation. He has not lost his consciousness, and is talking to the doctors,” said a source in the medical team.