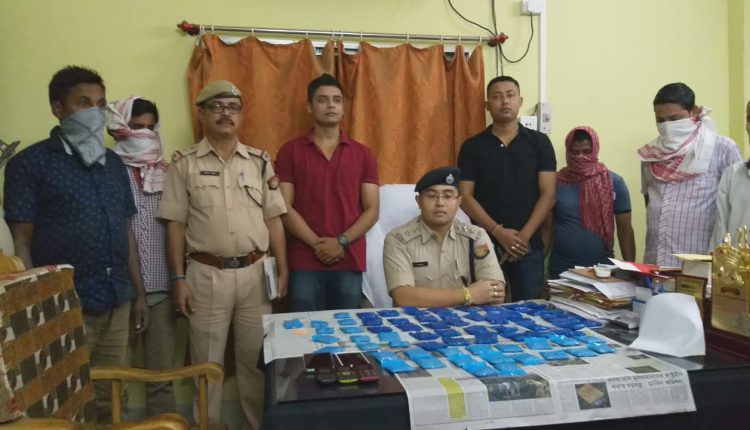 In another successful raid, a team of Cachar Police led by DSP, AJ Baruah managed to seize 67 packets of WY (World’s Yours) drugs from Silchar. Baruah was accompanied by IC Ronpur, SI Silchar Sadar and other Police officials when they conducted a raid in the Arkatipur area near Baskandi Road in Cachar district.

The 67 packet consignment containing 13,400 tablets is worth Rs 1.34 crore as Rs 1000 per tablet was seized. The officials also apprehended five individuals identified as Minaz Ahmed of Jirighat, Samir Roy of Jiribam, Bhushan Choudhury of Jirighat, Ansarul Haque of Jirighat and Bhuddi Singh of Jiribam.

SP Cachar, Mugdhajyoti Dev Mahanta said, “All our officials are on high alert and we will keep going hard at them. After we had our first success we continued the investigation and through that we got the next lead and that is how we have confiscated the consignments.”

SP, Mahanta believes that the (World Is Yours) drug does not have much demand in Barak Valley instead it’s widely sought after in Bangladesh. “Here, as per sources the cost per tablet is around Rs 1000 but the moment it reaches Agartala the price soars up to Rs 1400 per tablet. The smugglers use pedestrians to transport the illegal substance from one region to another,” Mahanta added.

Just a couple of days back a similar team of Cachar Police officials headed by A J Baruah conducted a raid in Bipar and managed to seize WY tablets worth Rs 2.23 crore.

1.3 crore worth drugs caught in silcharAssamBangladeshBarak ValleyHailakandiKarimganjSilcharworld yours drugs
Share

Silchar's Manoj Das dies in a road mishap in Mahasadak