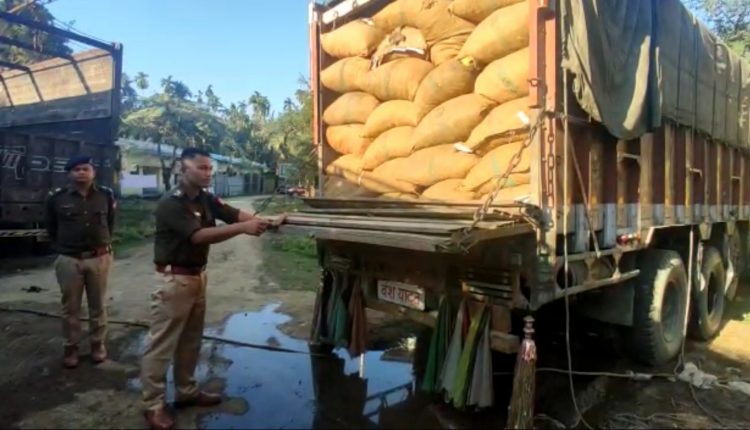 Since the time Dr. Ramandeep Kaur kaur took over as the Superintendent of Police, Cachar, she has kept the drive intense against illegal transportation of Burmese betel nut through the district. Several raids have been conducted so far and hundreds of kilograms have been confiscated. In association with Paltan Bazar Police, Cachar Police managed to nab one of the alleged masterminds – Nayan Ghosh. However, today, the Police formation tasted the biggest success.

A team of Katigorah Police, based on the instruction of Cachar SP, trapped three trucks filled with around 600 sacks packed with Burmese Supari. Each bag is estimated to weigh around 50 kilograms. As per market estimate, a kilogram of Burmese Supari costs around Rs 500 which means, the seizure is worth Rs 1.5 crore.

But it is not the quantum that makes it one of the biggest successes, says Cachar SP, Ramandeep Kaur. “We have had seizures before but this time, we have managed to nab four individuals who can lead us to the root of this nexus.”

“It is confirmed that those trucks were transporting the goods without proper documents. The individuals are being interrogated and the investigation is going on,” SP Kaur added.

It is worth mentioning here that the four suspected smugglers arrested with the consignment were travelling in a Maruti Suzuki Alto. Police has seized three trucks and the Alto along with the goods that were transported without proper documents.