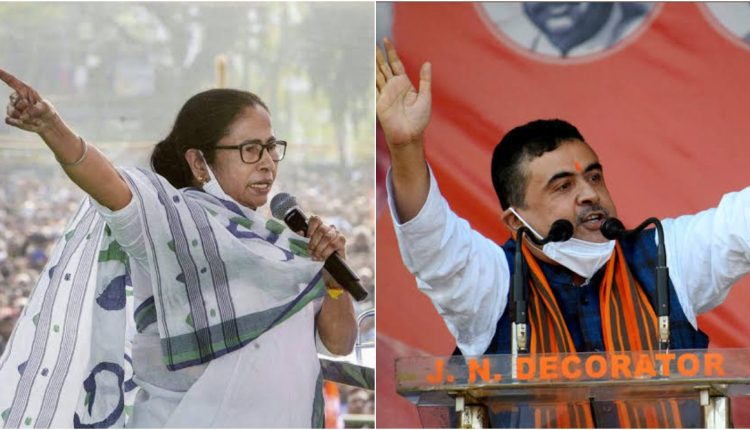 With fervant elections in five poll bound states – Assam, Kerala, Puducherry, Tamil Nadu and West Bengal, political activities are intensifying across the country. National leaders and star campaigners are frequently visiting the poll bound states attending rallies and launching scathing attacks on their opponents. Heavyweight politicians are changing parties to turn fortunes in their favour while many newbies are also getting denied tickets to contest. Other vetaran leaders being unhappy with ticket distribution in their party are contesting without party affiliations independently.

Amidst all the political rivarly and cacophony, what has caught the eye of many is the Bengal election where the saffron party BJP is trying to gain inroads by attempting to breach what has been an inexorable TMC fortress for the last ten years.

Mamata Banerjee, the Trinamool supremo is contesting elections from Nandigram constituency this time where she has locked horns with Suvendu Adhikari, the TMC turncoat of her own party who recently joined BJP. The decision came as a surprise to many as it marked a departure from her legacy of being a six time Member of Parliament from South Calcutta and a two time Member of Legislative Assembly from Bhabanipur constituency. It is believed that she chose Nandigram as a symbolic gesture of retribution against all the turncoats of her party who abandoned her for mending their own ways.

Notably, Nandigram is also infamous for the police brutality inflicted on villagers when the erstwhile left front government under Buddhadeb Bhattacharjee in 2007 tried to allot land to Salim Group for establishing a chemical hub in the region. 14 villagers were killed in police firing as per reports in the violent face off that ensued between protesting farmers and police. The government decision and brutal killings were met with vehement protests and criticism across the state and Banerjee became a crusader against the regime’s decision which rose her to prominence and subsequent victory in 2011 elections defeating the 34 year old left front government. Every year, the day March 14 is celebrated as Nandigram dibos by TMC organising processions as a tribute to the martyrs.

Significantly, out of the five police cases filed in Assam mentioned in Adhikari’s letter, one of them is from Udharbond Police Station. Going back down the memory lane, one might recall that a TMC delegation led by Firhad Hakim, the mayor of Kolkata and Mahua Moitra, the MP of Krishnanagar, had come to Silchar in 2018 for attending a public convention organised by local citizens forum after the draft NRC was published which excluded 40 million people from the list. The eight member delegation was detained at Silchar Airport by Assam Police officials which led to a scuffle and resulting minor injuries between both the parties involved. The delegation was detained for whole night at Silchar Airport and flew back to Kolkata the next morning. One of the woman constables injured in the scuffle lodged a police complaint at Udharbond Police station for allegedly assaulting her. The case No 177/18 was registered under Section 353 (assault or criminal force to deter public servant from discharging his duty), Section 323 (punishment for voluntarily causing hurt) and Section 338 (causing grievous hurt by an act endangering life or personal safety of others) of the Indian Penal Code (IPC). TMC back then countered the allegations by saying that they were instead ‘manhandled’ by the police officials and arbitrarily detained at the airport night long.

The Assam Police also subsequently took FIRs lodged by various persons and organisations in different parts of the state against Mamata Banerjee for her ‘provocate remarks’ regarding NRC and against her delegation trying to ‘breach public tranquility’ in the state.

Denying the allegations raised by Suvendu Adhikari, TMC spokesperson Kunal Ghosh said “Such allegations are clearly hinting that he is going to lose the Nandigram seat with a huge margin. Let the Election Commission respond to it. We will give a proper reply against the allegations.”

What needs to be seen is if the Election acts on tip off by the BJP leader or if it dimisses them as unworthy of scrutiny.