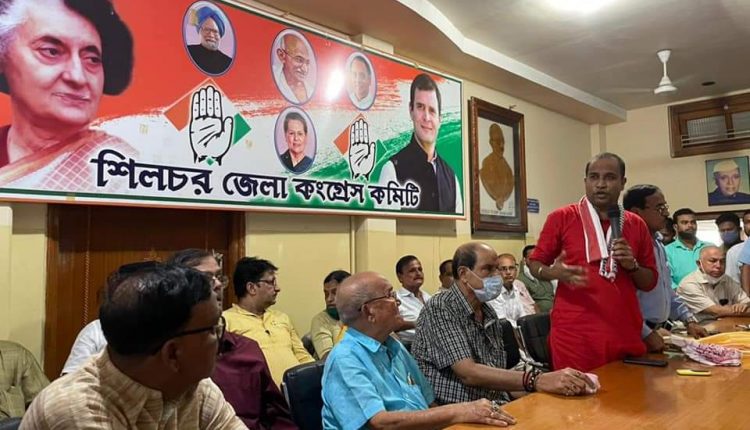 Chaos over Commercial Complex in Silchar Congress Bhawan; Leaders contradict each other

Today, Maa Construction Company had sent its workers to start the construction of the Commercial Complex which is a part of the Silchar Congress Bhawan. Congress members present at the office obstructed the men at work. Many eyewitnesses said that there was an argument between the builder party and Congress leaders. The leaders suspect, Sushmita Dev, who has recently quit Congress to join the All India Trinamool Congress (AITMC), is behind all this.

Congress’ MLA candidate from Silchar, Tamal Kanti Banik was one of them who obstructed the workers. Contradicting to the eyewitnesses, Banik says, “There was no chaos at all and just a polite discussion.” Adding, “Yes, a few from a construction company had approached the Congress Bhawan to start some work and that is when we told them that there is no committee now, let APCC declare the new committee and then you all can start the work. We assured them that there will be a discussion between them and the new committee, after which they can start the work.”

Eyewitnesses, however, mentioned that the Congress leaders in the Congress Bhawan shouted, “You all went missing for four years and now, just a few days after your leader left the party, you all have arrived from nowhere.” When asked, if Banik feels Sushmita Dev was behind sending the builders to the Congress Bhawan, Banik replies, “I’ve no clue about it. I am not completely aware of the agreement that was signed, I am not in the Construction Committee and so, it won’t be fair for me to comment on anyone’s involvement.”

“I don’t know who obstructed the builders and why, I am unwell, so, have not been to the office in the last three days. All I can say is that a proper agreement has been signed and the builders are well within their rights to start the construction work,” said District Cachar Congress president, Pradip Dey. He informs, “The agreement between the construction company and DCC to construct a commercial complex was first signed during Karnendu Bhattacharjee’s tenure. After that, when I became the president, we modified the agreement a little for the larger benefit of the party and the public. A construction committee was formed which combed through the details before signing the agreement,” shares Dey.

The agreement was first signed in 2016, and reviewed and modified later, but the work did not start for the last four years. What explains the delay? “There were injunctions and then came COVID. This is what forced the delay,” responds, the president of Cachar district Congress.

A senior member of the Congress, who is in the run to become the district president Partha Chakraborty is a member of the Construction Committee. He knows all the details about the Commercial Complex. The decision to Construct a Commercial Complex, he says, was taken keeping the “income” in mind. “The party will generate revenue and the area will look nice. It will benefit the organisation and that is why, unanimous decision, guided by the legal acumen of our lawyer Bolai Da led to us signing the agreement to construct a commercial complex. It was the decision of the party and not any particular individual,” adds Chakraborty.

Chakraborty explains today’s incident as “confusion”. He says, “People who knew about the agreement and the discussion were not there and that is why they stopped them.” Allegations were raised that Sushmita Dev’s loyalists were among the ones who went to the Congress Bhawan. Some even accused that Dev played a role in handing over the contract.

“It is unfair to drag her in today’s incident and link it to her leaving the party. The tender was invited through a public announcement and many construction companies submitted the bid. After following the process, it was handed over to Maa Construction which has its office in Kali Mohan Road, Tarapur,” says Partha Chakraborty.

While the anti-Sushmita brigade smells a conspiracy, the pro-Sushmita unit in the opposition feels former Rajya Sabha MP and Cachar president, Karnendu Bhattacharjee is behind sparking the controversy today that led to chaos.

The cracks in Congress and the lack of coordination within the leadership of the party gets exposed yet again. As per sources, APCC president Bhupen Bora has also asked for a briefing of the developments today. The state leadership of the Congress is expected to announce the formation of Cachar District Congress soon.