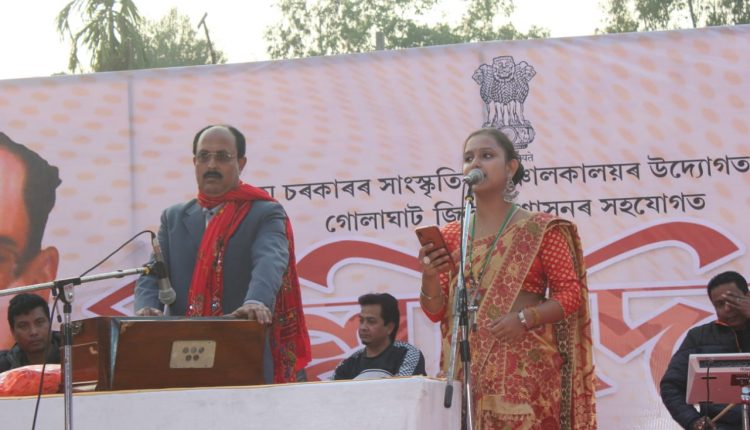 ‘Shilpi Divas’ is being celebrated in most parts of the state today in memory of Jyoti Prakash Agarwala.

Jyoti Prasad Agarwala (17 June 1903 – 17 January 1951) was a noted Indian playwright, songwriter, poet, writer, and film maker from Assam. He was considered an Assamese cultural icon, deeply revered for his creative vision and output, and is popularly called the Rupkonwar of Assamese culture. In fact, he is regarded as the founder of Assamese cinema for “Joymoti” (1935). His death anniversary (17 January) is observed as Silpi Divas in his honor.

She sang three songs, starting with Bharat Ratna Bhupen Hazarika’s ‘Manuhe Manuhor Bhabe’. Singing both Assamese and Bengali versions of the song, Bedopragya lived up to CM’s expectation of bridging the gap between Barak and Bramhaputra Valley. She also sang a song of Jyoti Prasad Agarwala and performed Bihu Geeti too.

Her performance was a major attraction for the attendees. Many spectators went on to click selfies with Bedopragya before and after her performance.