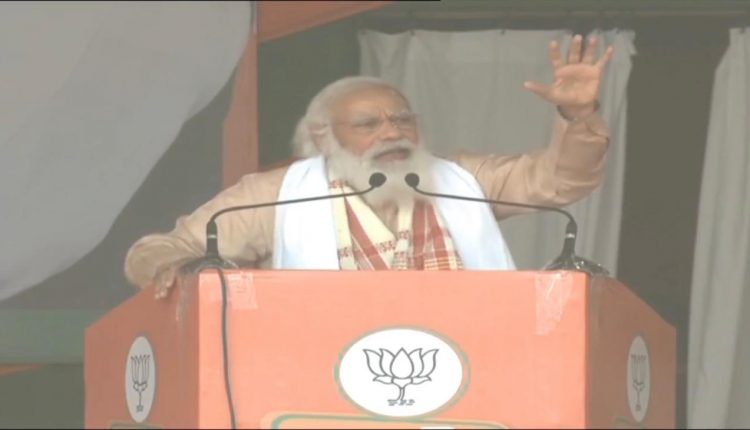 He added that Barak Valley was once a very well-connected region but the “Corrupt Congress” strategically disconnected Assam from the rest of the country and cornered the state in all aspects – economically, politically and geographically. He lauded the efforts of Sarbananda Sonowal and reminded the gathered crowd about broad gauge tracks, mini secretariat.

However, while listing down the developmental activities, the prime minister did not find any in Barak Valley and only listed the ones in Bramhaputra Valley. He named the longest Bhupen Hazarika Bridge, the Bogibeel Bridge, the Ropeway, and the Dhubri bridge in his speech.

For Barak Valley he kept going back to metre gauge to broad gauge conversion. “How much time does it take for the people of Karimganj to travel to Silchar now and how much time was it required earlier? The broad gauge track has improved Railway connection. Today there are multiple trains running on Silchar – Lumding and Silchar – Agartala routes. Who made it possible? It is the NDA that made it possible and we will continue with our efforts,” said Narendra Modi.”

He added, “Siddheshwar Shiv Bari, Sonbeel, War Memorial in Malegarh are the identity of Barak Valley and it is the NDA government’s initiative Namami Barak that took the art and culture of Barak Valley to the rest of the country.”

The Prime Minister also said that there is “an attempt” to develop a Multi-Modal Logistics Park in Silchar which will help this entire region economically. He reiterated that his government believes in “Sabka Sath Sabka Vikas”. However, his speech focussed on development and vocal for local did not find any space for the Hindustan Paper Mill or Assam Accord’s Clause 6 which are important election issues in this region.

He took a jibe at Congress and said it is a party without “Neta or Neeti”. The  Prime Minister went on to say that Congress is a confused party. “In Bengal, they are shaking hands with the left party CPIM while the same parties are abusing each other in Kerala. In Assam, a party that has the hand as a symbol is getting handcuffed with lock and key,” asserted the Prime Minister.

It is worth mentioning here that lock and key is the symbol of AIUDF which has stitched an alliance with Congress in the state.