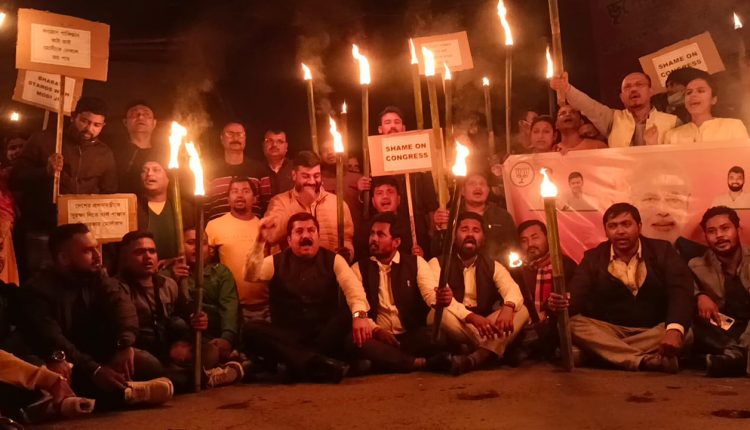 A large number of Bharatiya Janata Party (BJP) members along with members of the party’s youth wing – BJYM has marched with a torch in their hands from BJP’s party office in Itkhola. Through the heart of the town, they walked raising several slogans including “Congress – Pakistan Bhai Bhai, Modi Ji Ke Bhoy Pay,” which means, “Congress and Pakistan are brothers and they are scared of Narendra Modi.”

“This mashal michil was called by the BJYM’s Cachar’s unit. This is a mark of protest against the abysmal act of Congress Govt. in Punjab. Congress is Pakistan’s Dalal (Pakistan’s puppet) and through a few protesters, the Congress has stopped our respected and most honourable Prime Minister Narendra Modi while he was on his way to a rally. We condemn the act of Congress in Punjab,” said Amitesh Chakraborty.

As reported by the daily board sheet, The Hindu, Prime Minister Narendra Modi’s proposed event at Ferozepur in Punjab was cancelled on Wednesday after his convoy was stuck on a flyover for 15-20 minutes as the road was blocked by protesters near the National Martyrs Memorial in Hussainiwala.

The Ministry of Home Affairs (MHA) termed it “a major lapse in the security of PM”. It sought a detailed report from the State government and asked it to fix responsibility for the lapse and take strict action.