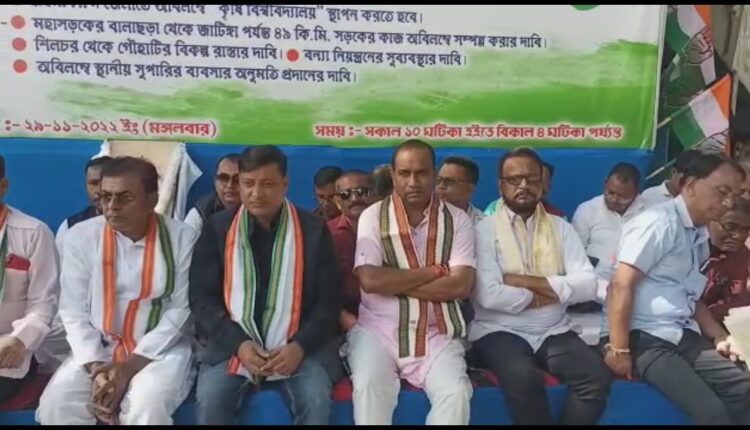 Amidst the ongoing Cabinet Meeting in Silchar, the Congress Party members of the three districts of Barak Valley have staged a hunger strike in front of Indira Bhawan, Silchar today. The hunger strike was led by three MLAs of Barak Valley from the Indian National Congress. Other than MLAs Kamalakhya Dey Purkayastha, Khalil Uddin Mazumder and Misbahul Islam Laskar, Tamal Kanti Banik, the Congress District President of Cachar also took part in the demonstration along with other members. The peaceful protest started today at 10 am in the morning and will continue till 4 PM today.

With a host of demands and calling this cabinet meeting a publicity stunt, different members of the INC spoke on the staged protest in front of Silchar Congress Bhawan. The members also said they won’t move from the spot as they are not interrupting any public affair and are sitting in their spot, which is the Congress Bhawan’s land on Park Road, Tarapur.

The list of demands of the Congress party includes the establishment of a Medical College in Karimganj, the establishment of an Agricultural University in Hailakandi, and the completion of 49 kilometres of Mahasadak from Balacherra to Jatinga at the earliest. Other than that, the Congress also demanded an alternative road connecting Silchar with Guwahati as the current road that connects the two parts goes via Meghalaya. Flood mitigation measures for Silchar and the issue of problems being faced by the local betel nut farmers were also raised in the sit-in protest.

On behalf of the Congress party, North Karimganj MLA, Kamalakhya Dey Purkayastha said, “Every government adopts yearly budgets for their state, but this government has fulfilled none of the plans and measures adopted in the budgets. Our CM is absolutely playing with the public sentiments. During his election campaign, when he came to Barak Valley, he went on to say that, the job vacancies for Grade-III and Grade-IV in Barak will be filled by the youths of our Valley but in reality, only 2 to 3 per cent of the youths of Barak Valley passed in the written exam that was recently held. We have no problem with the cabinet meeting that is being held, but we want answers before that, where is the Mini Secretariat, the planetarium or the flyover? All these tall claims, but nothing has been implemented”.

“This is not just our hunger strike, but we are sitting here with the demand of the masses. Why couldn’t the government make a medical college within 10 kilometres of Karimganj Sadar? Where is the agricultural university for Hailakandi? This cabinet meeting has excited all the leaders of Barak Valley, but I don’t understand this mentality, what is this excitement all about? If the meeting is held in Guwahati, will the issues of Barak not be discussed there? The problem lies with the ministers. Earlier we had strong ministers in the cabinet from Barak, but now these ministers are doing nothing for the Bengalis or for Barak”, he added further and said, “People don’t even know the names of these ministers today”.

Another member of the Congress said, nothing will come from this Cabinet Meeting except that the town got new paint and the garbage dumps were cleared from the town.