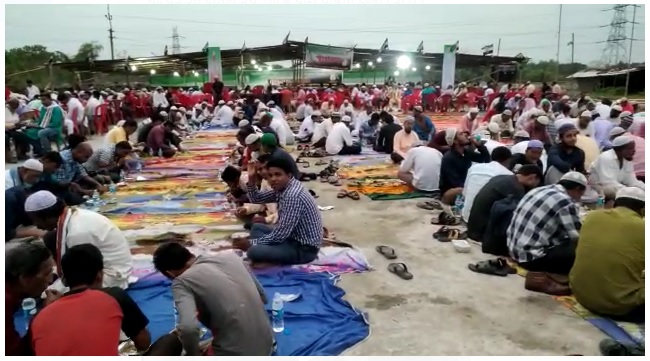 400 congressmen have ceremoniously joined the All India United Democratic Front (AIUDF) in Sonai. This comes a week after Congress tried to brand the AIUDF as betrayers of Muslim trust. Lionshare of the 400 Congressmen who switched sides, belong to the Muslim community. After Congress’s nominee, Ripun Bora lost the Rajya Sabha elections, Congress maintained that AIUDF MLAs were the betrayers and they were the ones who supported the BJP.

Assam Pradesh Congress Committee president, Bhupen Bora said that he will personally visit all districts to rejuvenate the Congress. Karimuddin Barbhuiya, who welcomed all the Congress members to BJP, made a mockery of Bora and said, “What will he rejuvenate when 90% of Sonai Congress have already joined the AIUDF.”

It is worth mentioning here that Sonai was once the bastion of the Congress. During the general election to the Assembly in Assam, 2021, Congress conceded the constituency to AIUDF as a part of its Mahajot (Grand Alliance). Only a few weeks after the election, Congress moved away from the alliance and now the party finds its elected members switching sides to join the AIUDF.

“I have no problems with the Congress, but my problem is with the man named Bhupen Bora. He has teamed up with the BJP and therefore not raising any questions against BJP’s absolute failure to control inflation, provide good governance and fulfill its commitment made in the budget,” added Karimuddin Barbhuiya popularly known as Saju.

The Sonai MLA, also the general secretary of the AIUDF, added, “Elected representatives of the Congress are joining AIUDF, and today, AIUDF is stronger than ever. On the other hand, Bhupen Bora is destroying Congress, weakening it every day in Assam.”

After the ceremonious induction to AIUDF, the new members of the party celebrated ‘Iftaar’ together. Sonai MLA, Karimuddin Barbhuiya also broke his fast sitting alongside the new members in the party. It was done to make them feel like home, said the AIUDF officials.