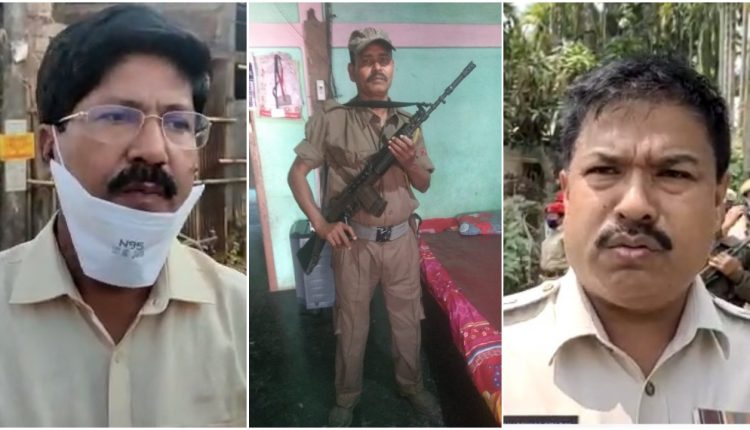 By barakbulletin On March 29, 2020 - 4:44 am
Share
An Assam Industrial Security Force (AISF) constable Bakhtar Uddin Barbhuiya died on Saturday morning. He was wearing his uniform (identical to that of Assam Police) and at around 8:00 AM in the morning he was headed toward his home.
Well, that is where fact ends and speculations start. So far, his wife narrated a story which SP Cachar ruled out on record putting forward a completely different tale with a caveat, “investigation is still going on”. In the evening, Sonai MLA and deputy speaker of Assam, Aminul Haque Laskar rubbished Cachar SP’s theory and again, on record said it was a murder and assured that the culprits will be nabbed and punished.

From mob lynching to death due to high blood pressure and then a murder. Constable Bakhtar Uddin Barbhuiya is no more but the mysteries remain.
Moments after Bakhtar Uddin’s death when the media contingent reached the spot his wife alleged that her husband was lynched by a group of people whom she knows by name. According to her, Bakhtar Uddin was on his way back and saw a market functioning as if it was just another day. “Since he was wearing a uniform, everyone in the market got a little worried,” she says. Why worried? Mind you we are in the middle of a nationwide lockdown and opening stores or volunteering in any kind of social gathering is a criminal offense. So, what she means is that the shopkeepers knew they were breaching the law and doing something criminal and therefore when they saw an individual wearing Police uniform they got worried.
She adds that her husband tried to ask people to stay away from each other and that is when he got attacked. “Alom Mazumdar, president, head committee of Sonabarighat market was the first one to hit my husband with a stick. Soon he was joined by Akka and his two sons and meanwhile, Afzal and his son Junaid joined too and they all started beating him mercilessly,” said Bakhtar Uddin’s wife.
Read about Bakhtar Uddin Barbhuiya’s death here: AISF Constable Dead In Sonabarighat Market; Family Says Lynched, SP Believes Died Due To Stroke
Now, did all that unfold in front of her eyes as she is even naming the culprits? No, she was not there. “My husband called me and said that he was being beaten by Alom Mazumder who was then joined by Akka with his two sons and later by Afzal and his son Junaid joined too. Hearing that, I rushed with both my son and saw that Alom Mazumder had hit my husband on his neck while others were beating him with a stick too. Immediately everyone started fleeing as they presumed Police officials will reach the spot,” AISF constable, Bakhtar Uddin’s wife clarified.
She said she requested an autorickshaw to help her and then sat on the auto and reached the nearest Police Outpost. From there, according to her, they rushed to Silchar Medical College and Hospital and Bakhtar Uddin Barbhuiya was declared brought dead by the doctors.
Meanwhile Cachar SP, Manabendra Dev Ray reached the spot briefed the media. He said he was worried as the “rumour” suggested that the constable was lynched by a mob for allegedly asking people to shut shops. It is clear that the SP Cachar is not buying what Bakhtar Uddin Barbhuiya’s wife claimed and instead believes it’s just a rumour which has nothing to do with what actually happened.
SP Cachar said, on record, “He had stopped at a pan shop and had allegedly got into a heated argument. Nobody had beaten him, his blood pressure spiked and it is possible that he suffered a stroke. We have checked his body carefully and we could not find any mark or scars of an impact injury and nor the eyewitnesses mentioned that (the constable being beaten by a mob).” Before signing off, SP, Manabendra Dev Ray informed that the dead body was in SMCH as the postmortem was due and the investigation is on.
The victim’s family and the Police had two very different understandings of what had happened and this is a very common phenomenon. However, it is worth mentioning here that the SP did not confirm if doctors told him that Bakhtar Uddin died due to high blood pressure. So, it is not clear if the SP was reading out a medical diagnosis or assessing on the basis of prima facie evidence.
Though SP said that Bakhtar Uddin was not beaten by the mob, Police detained four individuals in connection with the AISF constable’s death. Ahib Baktar Majumdar (Afjal), son of Fokoruddin Majumdar, Shamim Hussain Mazumder who is the son of Moinuddin Hussain Choudhary and two others from the Sonabarighat area.

At around 3:30, deputy speaker of Assam Aminul Haque Laskar who is also the MLA of Sonai constituency met a media contingent and spoke about the case. He addressed the case as, “Constable Bakhtar Uddin Barbhuiya Murder Case.” Like SP, even the deputy speaker of Assam did not confirm if he was informed by the Police after an investigation that it was a murder case or he opined on the basis of his own intelligence. The deputy speaker said, “As far as Constable Bakhtar Uddin Barbhuiya’s murder case is concerned, I assure strict actions will be taken against those who were involved in it. It does not matter who they are and what their stature is whoever is involved in the murder will get punished.”
With three versions coming out in the public all eyes now will be in knowing if the truth prevails.

You can hear all versions in this news bulletin”