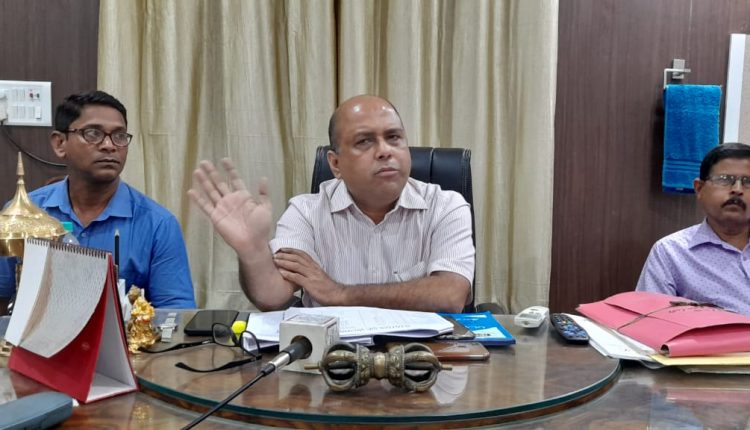 On Friday, Dr. Ray held a press conference at his residence to bring forward the latest state of the under construction highway of about 25.15 Km between Balcherra-Harangazao. Dr. Roy told that a supervising team led by the MP himself went to visit the work site two months before. But he met the officials to examine the progress in that work. Dr. Roy told, “In order to complete the work within the deadline, they have to utilize the winter season. Right now we are entirely focused on the stretch of 25.15 Km between Balcherra and harangazao.”

“According to the deal 10% of the construction was to be done within 13-07-2020, this much was achieved, next stage is to complete another 35% within next December, and in order to accomplish this, piling work needs to be accelerated, now the work stands at a stage, where, if we fail to complete piling, difficulties may arise, as rainfall starts in this region from March onwards, this would then obfuscate the piling. If the piling work gets completed, this will boost the entire work” Dr. Roy said at the press conference.

Dr. Roy also added that he gave a fixed time frame to the construction authorities and advised them to complete 20 pilings per day after Dugra Puja, a large machine has already arrived at the spot for this purpose. Another four to five large machines may arrive soon to accelerate the work. Total 96 culverts need to be constructed between the 25.15 Km portion of the highway and already 63 have been made, three is under-construction and the rests are yet to be made. Major headache for the portion is task of constructing nine bridges, where only two have been completed and construction of remaining seven is yet to be started. “I have told them to complete piling and ground work before monsoon” Dr. Roy again reminded at the press meet.

In this portion, there are total 22 small bridges, construction of only three is complete, 12 is undergoing construction and the work for remaining 7 is yet to be started. 26.1 Km drainage system is also need to be constructed between Balcherra-Harangazao, of which only 9.77 Km is accomplished. More than half of the protection wall is yet to be made. Silchar MP is hopeful that once this stretch of 25.15 Km is completed the remaining task of highway would be completed soon. Dr. Roy made it clear in the press meet that he is trying his best to complete the task of Maha Sadak within the estimated time.

On another account, Sushmita Dev, former Congress MP of Silchar, who recently turn coated to TMC and nominated to the Upper house of parliament, had mocked Dr. Rajdeep Roy few days back, and told , “Silchar MP has only one duty to receive CM Himanta Bishwa Sarma at the airport, he doesn’t do anything else.”

Dr. Roy today took a jibe at TMC MP, “I don’t need any certification from those who left one political party and join another for personal interest. People will judge me based on my work. Everything will be exposed if we compare the work done under my tenure of two and half years and with her (Sushmita Dev). Under my tenure, Silchar is having development in every aspect from Health to Road Construction. I have raised many questions in the parliament; every doubt will be cleared if we consider these questions, they will get to know how much work is being done under my tenure.”

Dr. Roy also goes on to say, “Receiving the CM at the airport also comes under my duty, what she couldn’t do within five years, I have accomplished more in my half tenure. So I really don’t need any certification from them.”