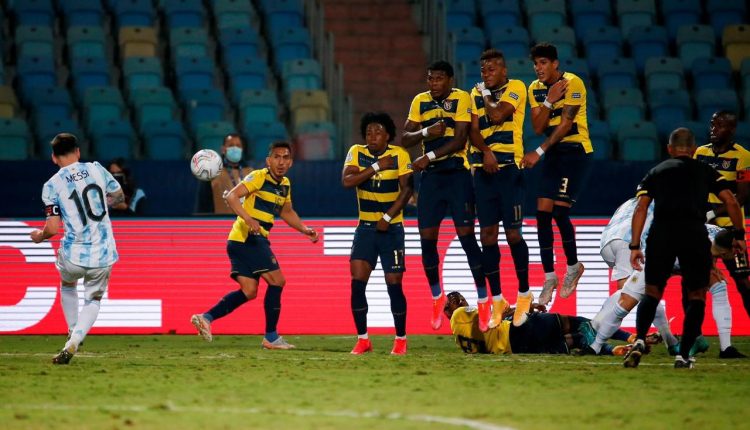 The Copa America 2021 tournament has been hit by Messi storm. In almost every match of the tournament, Lionel Messi is turning out to be Argentina’s saviour. Even in Barcelona’s jersey this season, LM10 hasn’t been this much consistent as he is turning out to be for his national team in the continental competition. And thanks to his performance, Argentina has progressed ahead in the tournament. Starting as favourites, Argentina is now just two steps behind in terms of Latin American supremacy. But the real battle begins from here.

In the quarter-final, Argentina snatched a 3-0 relatively easy win over Ecuador. Messi assisted in two of the three goals. For the third one, Messi scored in the injury time with the help of a stunning free-kick. Simply put, Messi mania has totally engulfed Copa America 2021. And after managing to clinch the semi-final ticket, Argentina is now most people’s favourite to win the tournament. The reason behind this is only Messi. Judging by the form of the Barca star, Argentina is considered to be a strong contender to win the title. But what if Messi can’t play his normal football? Honestly, at this moment, Argentina seems to rely heavily on Messi.

After scoring the first goal in the 40th minute, Argentina had to wait until the 84th minute for their second goal. For 83 minutes, Ecuador was still in the game. They created two or three great opportunities. But could not score due to lack of finishing. Even against a team like Ecuador, Argentina’s defence line was under pressure most of the time. Nicolas Otamendi, Acuña and Pezzella are not defensive defenders, they are attacking ball-playing defenders. When Messi and Martinez attacked, Otamendi stood at such a high defensive line that if the opponent counter-attacked, they had no choice but to foul. But this is happening in every match. As a central defender, Otamendi fouls too many times. Argentina coach Scaloni does not have much choice in the defense line though. Tagliafico, whom he fielded as a substitute in the last two games, is even one step ahead of Otamendi.

Ecuador could not take advantage of the flaws in Argentina’s defence line. But to suggest that teams like Colombia or Brazil will not be able to do so would be a grave mistake. The easiest way to stop Argentina is to mark Messi and keep him bottled up. Messi is the creator and finisher of this Argentina team, and he has no replacement in the team. Yes, it’s correct that Argentina has conceded just two goals in the tournament so far. But it is also another fact that they have not yet played against teams like Brazil.

Most Latin American teams now play rough football against superior rivals. Colombia will probably apply the same strategy against Argentina in the semis. They can play tough football, especially targeting the Argentine defence line. Otamendi has a bad rep of losing his temper on onfield. As a result, he is always on the opponent’s radar. Most probably Colombia will also target Messi in the semis. Because they know very well that if the Barca star could be stopped, Argentina can also be stopped as well.

At the moment, Argentina is enjoying their winning streak. Hence, at the moment, the drawbacks in the team are not visible. Not a single strategy of Scaloni has clicked yet. Despite that, the Argentine coach is continuing with these tactics. He is fielding Gonzalez in the first XI by keeping a star-like Angel Di Maria on the bench. The main reason for this is that Gonzalez can also play a defensive role in the midfield. ‌But Di Maria is a quality footballer. He is making a difference by coming on to the field as a substitute only. Di Maria could play an effective role along with Martinez if Colombia succeeds in stopping Messi.

On the other hand, Brazil too has so far failed to do justice to its name. However, as a team, they are much ahead of Argentina and quite balanced. Their defence line includes Danilo, Marquinhos, veterans Thiago Silva and Lodi. Casemiro, Fred and Firmino in the midfield, and Neymar on the offensive. Hence, a team boasting of such big names is worthy of respect. In the semis, Brazil is much ahead of Peru. However, the most disappointing team in Copa America has been Uruguay. The team never looked in rhythm from the first match. Suarez and Cavani looked exhausted. And the same could be said about Valvarde and Diego Godin as well.