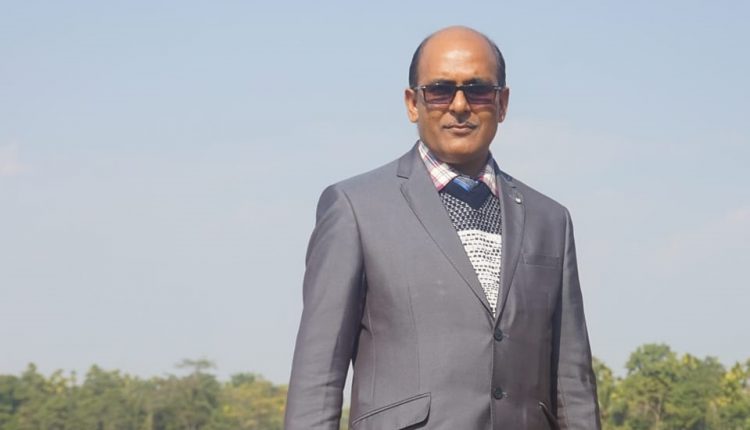 Associate professor, Department of Mathematics, National Institute of Technology, Silchar, Bijon Nath, and his family members tested positive for COVID19 on Tuesday. According to him, the process that starts from testing and ends with getting an allocated bed is “several encounters with death.”

Nath is a renowned professor in Silchar. Apart from teaching in the National Insitute of Technology, he offers private tuition to local students too. Many of his pupils are now established doctors and engineers. The contacts in the medical fraternity, as well as in the district administration, however, did not bring him any respite.

After getting frustrated, at around 10:00 PM, the professor tweeted tagging Health Minister Himanta Biswa Sarma and MP Rajdeep Roy. The tweet read, “Waiting from 12 noon to now with one bottle water only, near Sarala Birla School, for entry at the care center, we will die at bus even, shame on administration.”

Our correspondent, Biswakalyan (Tilak) Purkayastha reached out to professor Bijan Nath, a resident of Tarapur, for an interview and here are the edited excerpts:

Why did you decide to get tested for COVID19?

I was feeling unwell – little feverish coupled with the loss of taste. That is when I rang a relative of mine who is a doctor and he suggested me to get tested for COVID19 immediately. I went to the testing centre setup at Urban Primary Health Care near Annapurna Ghat and registered my name at around 12 noon. They asked me to wait as there is a long queue, which is understandable.

What time did your turn come?

At around 1:30 I tested positive for COVID19 using the Rapid Antigen Test Kit. I immediately called up my doctor and he suggested to get the whole family tested immediately. So, I called my wife and two daughters to the testing centre since they have been in direct contact with me. Their tests got done by 2:15 PM. All of us were infected by the virus.

Did you apply for home treatment?

Yes, I did. I called up Suman Choudhury (media expert, district health department), who I have been told is responsible for the transfer of patients. When I told him the entire family has tested positive so we would like to opt for home isolation, he politely declined. He explained it to me that since I was symptomatic, it isn’t safe for me to stay at home. He also flagged that the neighbours might find it uncomfortable. So, I agreed for isolation in a COVID Care Centre.

What happened after that?

The harassment started. I left for testing at 12:00, so it is obvious that I did not have my lunch. By the time all of our tests were done, it was already 3:00 PM. We were just sitting there, not even allowed to move around. We were starving and that is when I messaged Mr. Sumit Sattavan (ADC Cachar). He was very cordial and within a few minutes, each one of us got a bottle of water. But that is all! I could have died not because of corona but of hunger and heat. This kind of harassment should not be forced on people, especially when they are in such a state of mind. I am still not able to fathom how I got the virus since I have been at home and only stepped out to get essentials.

Okay, what time did you board the ambulance and leave for the COVID Care Centre?

There was no ambulance, it was a bus. At 7:00 PM we boarded the bus and there were six of them transporting more than 120 COVID positive patients. We left for Sarala Birla School which is located in Meherpur and has been converted to a COVID Care Centre. We reached there at around 7:30 and that is when I completely lost it. This is not how the administration should treat COVID positive patients.

What happened after you reached the COVID Care Centre that you got so upset?

Mind it, we were kept waiting from 12:00 noon to 7:30 PM in such hot and humid condition with just a bottle of water. When we reached the Care Centre we had already exhausted all our patience. After reaching the gate of the school, the in-charge refused to open the gate. There is no clue why they were doing that. We were left waiting on the bus.

For how long did you wait there at the gate?

I got my bed allocated at 10:15 PM. While it was a 10-hour long journey for us, the last two hours on the bus was just unbearable. It was painful, the body was tired; irritation was at its peak. For a minute, I started feeling like I will die in the bus itself. That is when I tweeted tagging the Health Minister and Silchar MP. It is 11:00 PM as we speak, I am lying on my bed and the arrangements look fine and comfortable. However, no clue when we will get our meal.