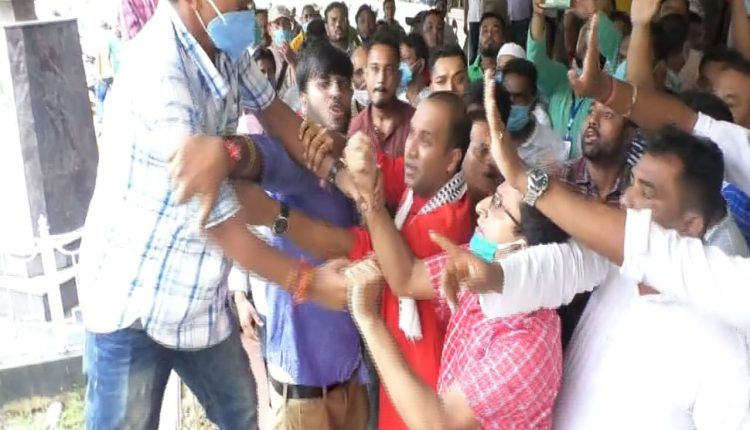 Congress Bhawan in Silchar is in complete shambles. In front of the Assam Pradesh Congress Committee’s (APCC) working president Kamalakhya Dey Purkayastha, two fractions started manhandling each other. Purkayastha had to physically intervene to bring the house in order. As per the instructions of Assam Congress president Bhupen Bora, Purkayasytha called for a meeting of Cachar Congress in Silchar headquarters. As soon as Purkayastha entered the premises, few Congress loyalists whispered, “Why is someone from Karimganj coming and taking charge of Congress in Cachar, don’t we have leaders here…”

The whispers kept getting louder and a group of people started raising “Sushmita Dev Murdabad Slogans”. Immediately they were stopped by the senior leaders of the party. “The person who is not here at this moment and not associated with the party anymore, must not be highlighted,” the senior leaders said.

The meeting chaired by Kamalakhya Dey Purkayastha continued. He appealed to the members present there to remain united. “There is no I within us. We are a team and we will fight it out together,” he said. But before he could finish his speech, he got interrupted.

One member asked Purkayastha, what action will be taken against the position holders who remained absent today. Former Minister, Ajit Singh and Congress veteran, Sanjeev Roy asked the member to calm down and they will look into the matter. The member raising the questions was none other than Ansar Hussain Barlaskar, former Vice President of Jubo Congress. When Ajit Singh tried to explain the situation to Ansar, he back answered and that irked the supporters. Ansar’s friends retaliated and it turned into a brawl.

Later, Purkayastha said, “I have been told that he is under suspension for six years. I will look into it, who suspended him and why. However, his questions were legitimate and a committee has been formed to evaluate the situation under which the position holders remained absent from today’s meeting. If they don’t have genuine reasons, actions will be taken against them.”

He also said that 90% of the meeting was peaceful and effective and therefore, it won’t be fair to only highlight the 10% that didn’t go as per plan. “People are emotionally attached with Congress and the huge turnout here today is proof of it. We will fight back harder and our united goal of Cachar Congress is to defeat Rajdeep Roy in the 2024 Lok Sabha elections,” asserted Purkayastha.