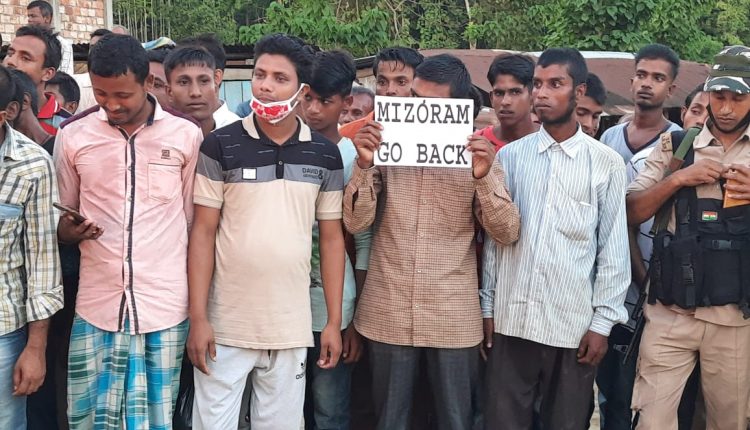 Current Situation and the History; Subimal Bhattacharjee writes about the Assam-Mizoram border dispute

As Sarbananda Sonowal, the Chief Minister of Assam celebrated his 59th birthday on October 31 this year, amidst the flurry of birthday wishes on social media, one tweet stood out from Pu Zoramthanga, his counterpart from Mizoram. The tweet apart from conveying his wishes also mentioned the need to maintain peace on the shared border between the two states. The Assam CM responded by speaking about the need for working together to strengthen the brotherhood between the two states. This was an acknowledgement of the need for dialogue between the two states in working out the boundary dispute and was a welcome step. Unfortunately, the spirit and purpose of the tweets was lost in no time.

The current round of tensions and turmoil originates with the Covid19 pandemic. As reported, the Mizo student body volunteers started putting up checkpoints on the Assam side of the border alleging that most of the people living along the border were illegal Bangladeshi immigrants and were acting as a vector for the pandemic. The checkpoints even prevented Assam Forest officials from their routine movements. This deliberate provocation led to unrest along the border in the beginning of October 2020, in the lead up to the Durga Puja when Assam’s Karimganj district authorities burnt a farm house which was illegally constructed by a person from Mizoram in the reserved forest area within the territory of Assam, an area which prohibits building any habitats. On the second week of October people from both sides of the border, Assam’s Cachar district’s Lailapur and Mizoram’s Kolasib district’s Vairengte got involved into violent clash that led to multiple injuries and structures were burnt by miscreants on both sides.

Immediate intervention by the Union Home Ministry and the subsequent dialogue between the two states saw the tension abate for a short period. This truce was broken when a Bengali medium school at Saihapui V on the border was fire bombed, resulting in immediate escalation of tensions. A subsequent attack on trucks coming from Cachar District resulted in a complete blockade of the National Highway 306 which is the lifeline for Mizoram. Today, the blockade of Mizoram entered its sixth day which has severe consequences for a state that depends on the highway for all essential items, most of which has started vanishing from the markets as prices skyrocket. But that has not changed the aggression where the security forces aided by the locals have started digging trenches on their version of the border and fortifying themselves.

The Assam government has viewed these clashes as a law and order problem, which is honestly what it is. But the perspective of some of the residents of Mizoram is that it is a border dispute and the descendants of the Lushai tribes are being denied their rightful home by the increasing encroachment of what they consider as Bangladeshi immigrants.

The border dispute can trace its origins to the demarcation of Lushai Hills by the British during the Bengal Eastern Frontier Regulations in 1873. The fact remains that even after that, Lushai Hills and adjoining regions were administered by Cachar District Administration. The original state of Assam included the Lushai Hills and Mizoram became a state only in 1987. The Mizos claim that they abide by the 1875 demarcation which had been effected by the British to completely sequester the movements of the Lushai tribes who were also known as head-hunters and were famous for their blood thirsty exploits. It might also be worth mentioning that the Assam Levy (Now Assam Rifles) was set up in 1835 with the sole objective of controlling the Lushai tribe attacks on tea estate. What is not taken into consideration is that there have been huge geographical upheavals in the region changing the landforms over the last 150 years and the original demarcation no longer holds ground. Having said that, the issue needs clear dialogue between both sides aided by the union government to resolve the issue.

The problem though lies in the fact the Mizoram Government has not managed to rein in the student bodies like the Young Mizo Association (YMA), Mizo Zirlai Pawl (MZP) and Mizo Students Union (MSU). These student bodies are not willing to stand down in this conflict and have been adding fuel to fire by stoking local sentiments through messages circulated over social media depicting themselves as fighting illegal immigrants. The local law enforcement has done nothing to crack down on these bodies despite mounting toll and increased tensions. Only a couple of days back, a young man was brutally killed by some of the marauders in Lailapur, and then justification provided with doubtful reasoning. And as the standoff continues the death toll will only go up.

With the Assam government taking a grim view of the situation, the stage is set for a massive pushback from the law enforcement agencies against the Mizoram infiltration. Assam’s senior cabinet minister and NEDA chairman Himanta Biswa Sarma spoke of the need for dialogue to solve the crisis but expressed his belief that such dialogue should wait till the next state elections due in six months. I don’t think we have the luxury of that time and need to sort the issue right away.

With the ongoing blockade, Mizoram is entering a situation where the supply from the neighbouring states of Tripura and Manipur will not be enough for local needs. The fortification along the border will result in growing violence with the potential to turn into an all-out conflict. Dialogue has to start now and the Mizoram authorities need to crack down on the social media campaign designed to promote divisiveness as well as rein in the student bodies from adventurism if the situation has to return to normal. Hopefully peace will prevail and all communities involved will bring peace and calm to the border regions and allow the governments to maintain law and order in their respective states.