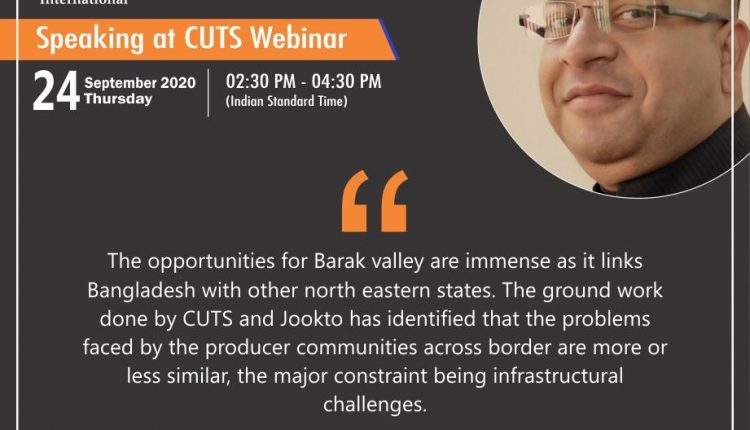 People-centric cross-border trade in local products through participation and partnership is a key for India-Bangladesh border area development.

“Trade is not just about negotiations to under its possibilities. It is more important to make cross-border trade happen as producers and consumers on both sides of the international border between Bangladesh and India are to gain from it.”

“We need to optimise the number as well as content of rules and regulations and facilitate their implementation for thinning the border,” said Bipul Chatterjee, Executive Director, CUTS International, a global policy think- and action-tank on trade, regulations and governance.

He was speaking at a webinar held today by CUTS International under a regional programme on Trans-boundary Rivers of South Asia managed by Oxfam Novib.

According to Subimal Bhattacharjee, Director, Jookto, a grassroots organisation in the Barak Valley in Assam working on socio-cultural and economic development of local communities, “The opportunities for the Barak valley are immense as it links Bangladesh with other north eastern states.”

“The ground work done by CUTS and Jookto has identified that the problems faced by producer communities across border are more or less similar. A major constraint is infrastructural challenges.”

In his remarks, Jyotiraj Patra, Project Manager of the TROSA Programme, articulated on the need for making opportunities inclusive and people-centric by building partnerships and ensuring participation of young business leaders including women.

The webinar brought together traders, business communities in India and Bangladesh to discuss specific issues and problems that concerns while trading across border through waterways.

Speaking on the occasion Niranjan Roy, Professor of Economics at the Assam University commented that “Inland waterways are most cost-effective means of transportation. Our common legacy of history says that there are a lot of opportunities, which should be re-explored.”

“For trade to sustain for a longer period, it is important to ensure people-to-people connect and confidence building measures on the ground.”

Procedural issues, non-recognition of standards and infrastructural constraints are major bottlenecks of trade between Bangladesh and Northeast India as mentioned by Abu Taher Md Shoeb, President, Sylhet Chamber of Commerce.

According to Sujit Roy, General Secretary, India-Bangladesh Chambers of Commerce and Industry (Tripura Chapter) and All Tripura Merchants Association, the opening of new trade route between Sonamura in Tripura and Daudkandi in Bangladesh on a pilot basis has generated a huge excitement among the traders.”

“This needs to be converted to a regular cross-border trade happening through this route. “Unless navigational challenges are addressed, its full potentiality may not be realised,” he added.

According to Shalahuddin, Manager-Export, Premier Cement Mills Limited, Bangladesh, the business group which had recently sent the first cargo consignment from Bangladesh to Tripura, “Trade via waterways saves time and money. As a result, consumers get a better access to locally-produced low-cost products. Encouragement of such trade in local products will contribute to local areas development in the border areas of Bangladesh and India.”

Expressing his thoughts, Deborshi Bhattacharjee, President, Assam Exporters and Importers Association, Karimgunj, highlighted the importance of balanced trade. Removal of port-specific restrictions on tradable commodities, establishing quarantine facilities through testing laboratories and up-gradation of waterway channels by dredging are three major issues brought up by him.

This was echoed by M L Debnath, President, Tripura Chamber of Commerce. He insisted that India and Bangladesh should make further efforts to increase the depth of navigation by dredging specific stretches of the Gomti River and the Bhairab River, along with removing port-specific restrictions on trade and reduce their high tariffs on some Indian goods that Bangladesh imposes.

“At least locally produced items from Tripura should be allowed to be traded with Bangladesh,” he argued.

According to Arun Roy, an expert on river engineering and inland water transport, instead of looking for big vessels, one should encourage smaller boats for facilitating cross-border trade between India and Bangladesh via small stretches of waterways.

“Small boats can navigate low-depth conditions and is economical for short-haul trade. Trade can happen throughout a year.”

Concluding the programme, Bipul Chatterjee and Subimal Bhattacharjee said that CUTS and Jookto will prepare a memorandum covering the suggestions made by various chambers and submit that to relevant ministries in India including at the state level in Assam and Tripura. Through their partners, it will also be taken forward to the relevant stakeholders in Bangladesh.