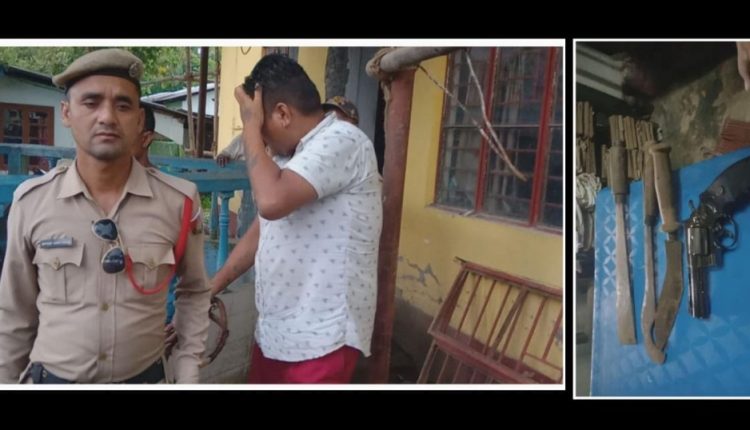 Udharbond police on Wednesday, arrested two suspects in connection with the robbery, that occurred around a month ago at Ranjeet Kumar Sharma’s house in Udharbond. The arrested are Rohit Kumar Singh(27), son of Shankar Kishore Singh, a resident of Pangram, and Sipon Uddin Chowdhury(36), son of Bharat Ali, a resident of Lathigram. Police recovered sharp weapons, including a toy revolver, from them.

According to Police, on Tuesday night when they were in routine patrolling, saw a AS 01 F 2514 Maruti car standing in front of the co-operative at VIP road. On searching, they recovered two daggers, 1 toy gun along with other sharp weapons from the car. Police also detained the two said person from the car and later brought them to the police station.

Udharbond Police Station Officer-in-Charge Asit Suthadhar told reporters that duo may be involved in the robbery that took place at Ranjit Kumar Sharma’s home six miles from Udharbond on August 4. They are suspecting it so because the sharp weapons that have been seized from their car exactly matches with the weapons seen in the CC camera at Ranjit Kumar Sharma’s house. So Police is suspecting that these two men were involved in the earlier robbery.

They were taken to court today and later they were brought to police remand for questioning, he said.